Visits back home to Ireland will always rekindle grief

This trip was to show my daughter her Irish family, and the land that shaped me 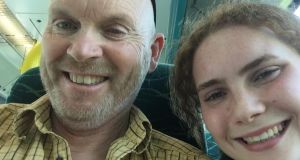 Philip Lynch with his daughter Molly on the plane from Hobart to Dublin.

It’s a slow shuffle towards the service desk at the car hire place near Dublin Airport. But it’s a patient, near silent shuffle. The hipster-looking lads at the desk aren’t getting flustered, and we get there in the end. After a peculiar conversation as to why Australian driving licences don’t have issue dates (I’m still none the wiser), I finally get hold of the key, and my teenage daughter and I head outside to the car.

I adjust the seat and the mirrors, and get a feel for the Fiesta. I don’t need a fancy car. I don’t need much. We are finally on our way to a part of the country where only a tiny fraction of the seven million tourists who visit Ireland every year are inclined to venture.

The clouds are low, a mixture of black and grey. Surely, it’s about to bucket down. It’s mild enough and even a little humid, but there’s no call for a jacket or jumper. The kind of weather that used to drive the old man to despair when his meadows were mown. Right on cue, as we head west, a smattering of raindrops falls on the windscreen.

Being back feels oddly familiar, like an uneasy catch up with an erstwhile friend with whom I no longer have much in common. Hobart to Dublin feels like an epic journey. I honestly don’t know how things will pan out. There has been a lot of slippage over the past decade, since my parents died.

I’m hoping this visit will be less complicated, less fraught. The last time I was here, we were burying our father and, the preceding visit, our mother. All of us – my brothers and sisters – are well into our middle-age. My eldest sister has turned 60. Another sibling has had a hip replacement. We’re likely to be grumbling about misplaced reading glasses, or be struggling to remember names and the chronology of recent events. Soon we won’t be able to ignore our creaky joints and nagging ailments.

This trip is also about introducing my daughter to her aunts and uncles and cousins, and perhaps instil in her some sense of what’s moulded my Irishness, or what’s left of it. She will get to see the midlands, where many farmers like my brother, who’ve finally got the run of the place, now find themselves holding down other jobs to augment their incomes.

There will be a gathering with my remaining brothers and sisters and nephews for Sunday lunch at a hotel in the next county. There will be banter and talk about neighbours who have died, prospered or simply carried on, carrying on. There will be an opportunity, but hardly an expectation, to go to Mass, if I’m so inclined. But that particular ship has long since sailed. Maybe I’ll get to have a pint at the local in Finea, but that may well depend on how my brother rates their black stuff these days. He wouldn’t be seen drinking a bad pint.

And of course, I’ll visit my parents’ well-tended final resting place, down on the bog road.

Beyond family and a few familiar faces, I no longer have any social network. Facebook friends are simply Facebook friends. For many of us, when we emigrate, relationships simply slide.

We exit the M50 at Mullingar, and after we pass through that grey former army town with its one-way streets and imposing cathedral and spire, the road seems narrower, windier and with more bad bends than I recall. The fact that my departed mother won’t be anxiously anticipating our arrival adds a tinge of bittersweet regret. Visits home will always rekindle this grief. My sister is taking the afternoon off to cook us dinner. She won’t pay any heed to my protests. So, it’s best I relax and enjoy her generosity.

Even after all this time away, I’ll leave this place with a lingering longing for something that I still struggle to articulate

A few days later, drawn to Dublin as much for my daughter’s sake than anything else, we find ourselves amidst the slow-moving throng of tourists on Grafton Street. Outside the North Face store, a young sunburnt bloke wearing shorts and a T-shirt is doing handstands and backflips. A hand-written sign on a piece of cardboard simply states “for travel”. His upended baseball cap on the ground has a paltry few coins, hardly enough for public transport. But I admire his ingenuity. It’s a welcome change from mediocre busking.

We cut through a side street and I go into Hodges Figgis in search of Ian Maleney’s much heralded Minor Monuments, and Sineád Gleeson’s Constellations. Feeling pleased, I cram them into my backpack. We make our way over to St Stephen’s Green. But all the benches are taken and people are sprawled about awkwardly on the grass eating their lunches and drinking coffee and cans of soft drink.

For some reason I can’t quite explain, I look around, half-hoping, somewhat bizarrely I know, to see eucalyptus trees or to even to hear kookaburras. But it’s those over-sized seagulls that are everywhere; gliding around unhurriedly and looping in slow low arcs as if they’ve taken out an exclusive lease on the place. Ducks are huddling in twos and threes amongst the lilies in the corners of the pond. For the remainder of the day, wherever we walk, raucous cries of seagulls are echoing all over the city.

In no time at all, we’ll be dropping off the Fiesta, and beginning our long-haul home to winter in Tasmania. We’ll be back in time for all the blossoming wattles and the first of the daffodils and jonquils.

Even after all this time away, I’ll leave this place with a lingering longing for something that I still struggle to articulate. Perhaps it’s my sense of wanting to belong in a place where I once belonged. Leaving always stirs up a sadness I know I will need to set aside, again. This dislocated, almost double-edged life of an emigrant. It runs deep.