From Cork to Waterford – a feast of food festivals

Food File: Oktoberfeast on the northside, recycle in Foxrock and handy new dressing 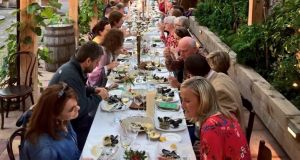 September is food festival prime time, with some of the country’s biggest events taking place in the coming weeks. The East Cork Food & Drink Festival (September 1st-8th, feastcork.ie), based in and around Midleton, has an action-packed programme.

Not to be missed is the al fresco long-table dinner at Sage restaurant on Thursday, September 5th, when chef Kevin Aherne’s four-course menu will be served with natural wine pairings from Le Caveau in Kilkenny (€80).

New to the programme this year is Ireland’s first Local Wild Food Challenge, a spin off of a concept that originated in New Zealand in which competitors create a dish from wild food and present it to a panel of judges who assess it in terms of taste, presentation and its back story. Entry is free and registrations will be accepted in the festival tent between noon and 2pm on Sunday, September 8th.

There’s an unfortunate date clash with the Waterford Harvest Festival taking place not too far away (September 6th-8th, waterfordharvestfestival.ie). Greenway Grazing the Waterford Way, is a new event, on Friday, September 6th (noon-4pm), which will see the Waterford Greenway, a walking and cycling route following the old Waterford to Dungarvan train route, become a local food market.

The closing event is a dinner for 30 people at Faithlegg House cooked by the hotel’s head chef Jenny Flynn, along with Pamela Kelly (Farmgate Café) and Paula Hannigan (Cliff House hotel). Tickets for this five-course menu with wines chosen by Tindal Wine Merchants are €75 and can be booked at garterlane.ie.

Also overlapping slightly is the Taste of West Cork Food Festival (September 6th-15th, atasteofwestcork.com), a massive initiative involving 50 towns and nine islands. Four chefs from Australia and four from the US are participating in a variety of events at this festival, as well as well-known local chefs Ahmet Dede, Rob Krawczyk and Michael Quinn.

Schnitzel on the northside

Brother Hubbard North on Capel Street in Dublin 1 is embracing all things German for its Oktoberfeast event on Sunday, October 6th. “I’ve long been passionate about German food. I feel it is overlooked, and it is a delicious and important cuisine,” says owner Garrett Fitzgerald.

The set menu will begin with German breads and pickles and “interesting bites”, followed by schnitzels, warm potato salad, spaetzle and vegetables, and a take on Black Forest gateau. Vegan and vegetarian options will be available.

“We’ve also recently launched our own Brother Hubbard beer in collaboration with our friends at Eight Degrees in Mitchelstown,” Fitzgerald says, and the €32.50 ticket (available on Eventbrite) will include a glass of the beer. Bookings are being taken from 5pm.

These little 20ml bottles of oil and vinegar dressing are handy for desk lunches and meals on the go. A new product made with Collar of Gold Irish rapeseed oil and balsamic vinegar, it is beginning to be stocked by independent delis around the country, selling for €1.

Collar of Gold is a neutral oil that has had the strong taste, colour and aroma often associated with rapeseed removed. It is endorsed by both Kieran Glennon and Eric Matthews, head chefs respectively at Restaurant Patrick Guilbaud and Chapter One, who say they use it for dressings, sauces and mayonnaise.

Pat Kane has opened a shop in Foxrock, Co Dublin selling 350 products aimed at reducing waste, such as reusable beverage cups, bamboo cutlery, water bottles and beeswax food wraps. Reuzi, on Brighton Road, will also host workshops on sustainability and eco-living topics and activities, such as how to make your own body butter.

Kane was born in Rio de Janeiro and met and married Irishman Stephen Kane while working in the Caribbean. It was when she gave birth to the first of her two sons that she became aware of the amount of rubbish she was generating, from plastic wraps and bottles to nappies.

“My initial reaction was to educate myself on recycling and composting. Our end goal as a family is to replace everything that won’t be recycled or composted with reusable alternatives.” There is also an online shop at reuzi.ie.