Review: A young woman chef is leading a French kitchen from the classics into something new 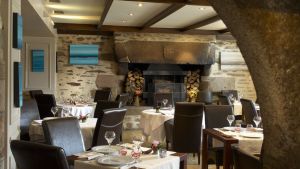 I pictured a little stone house with a cast iron sign outside. The speciality would be galettes with a local cheese and some foraged mushrooms fried in Normandy butter. Maybe this would be finished with tarragon from the plentiful potager garden out the back. All of it served by an apple-cheeked woman to charm the four hungry children I’m driving from Brittany to Normandy into loving our lunch as much as I would.

Fantasy France fails to appear. Around each bend the pretty villages are empty, as if marauding zombies are coming. So we’ve wound up in a car park, an Intermarché car park, necking baguettes, plastic-wrapped cheese indistinguishable from its wrapping, and peaches that mysteriously combine rock-hardness with clothes-splattering quantities of juice. Not forgetting a carton of Intermarché’s finest celeriac coleslaw.

No “living our best lives” social-media posts were harmed in the making of this pit stop. But we are leaving Brittany with one very good food memory.

Some aggressively blue modernist seascapes could do with being retired to a darkened cellar, so diners never have to look at them again. But this visual hiccup is the only one

At 29, Nolwenn Corre is one of France’s newest and youngest Michelin-starred chefs, pipped to being the youngest woman in this year’s round of new French stars by Baieta’s 24-year-old Julia Sedefdjian.

Corre’s grandparents opened a hotel in the 1950s in the Breton village of Plougonvelin, in Finistère, France’s most westerly county. Her parents were running it when she was growing up, and now she’s head chef at the Hostellerie de La Pointe Saint-Mathieu.

We arrive at the tail end of a storm. The weather alert has warned people that this is a winter storm in summer. It’s the kind of swell that visitors don’t normally encounter. These are the storms the Finistère fishermen and locals know to avoid. The town has an Abbey in ruins beside a towering lighthouse overlooking the boiling waves; human prayer and engineering in the face of raw Atlantic force.

The hostellerie is all ancient stone walls, beams and catacombs and some aggressively blue modernist seascapes that could do with being retired to a darkened cellar, so diners never have to look at them again.

But this visual hiccup is the only one. What’s happening here feels like a transition from one generation to the next, the stiff and haughty French cheffing canon with some playtime around the edges.

So Liam's  “Discovery” set menu is almost entirely classical and coastal. There’s a dashi with the “local edible crab”  (do they serve the inedible ones on a Wednesday?) and some samphire, but everything else is from the haughty heights of the high-end French restaurant school of cooking.

Brill and artichokes follow, and then the Breton lobster. So good they serve it twice, the first plate with a halved lobster and a lobster-meat-stuffed courgette flower, the second with the lobster poached in shellfish stock and teamed with spinach ravioli and tarragon sabayon.

That fluffy sauce typically made with wine and sugar as a dessert is just the thing with the exceptional sweet lobster flesh. So far all very business as usual.

The really interesting things are happening on the margins, like Corre’s noisette butter, a small whipped ball of loveliness like Nutella snuggled up to a churn of cream. It’s a butter that turns the fresh selection of house breads into true treats.

The main course is presented in an elaborate white curved bowl that reminds me of a French hole-in-the-floor toilet, but it contains one of the best risottos I’ve had in a restaurant

I try the “Menu au Naturel” at €40 (which mysteriously ends up as €30 on the bill). Even with the listed price this has to be one of France’s best-value Michelin-starred dinners. The opener is a seasonal summer salad. Here it’s red-fleshed potatoes that look like rhubarb but taste like nutty fingerling spuds. Scrolls of courgette are curled up in between, and there’s a puddle of courgette and basil dressing to ground it all in summery greenness.

The main course is presented in an elaborate white curved bowl that reminds me of a French hole-in-the-floor toilet, but we won’t hold that against it. The contents are one of the best risottos I’ve had in a restaurant. Black quinoa is the grain, pops of nutty, almost crunchy flavour smothered in Parmesan and a silky stock.

It’s all topped with slippery, butter-fried chanterelles and deep-fried Jerusalem artichoke chips, like a pile of leaves where some are sodden and some still crisp. There are green beans here too, because (we know this from our market trips) bean season is in full abundant flow.

Liam’s dessert is a Galway races hat made of chocolate, one feather-like chocolate creation standing proud on the plate surrounded by boozy confited cherries, cream and a cherry sorbet that makes it all very Black Forest gateau, in a good way.

Like everywhere else, France is changing. Some of those changes are sad, and some, like the direction this old restaurant is taking, are exciting. A young woman chef leading a kitchen through the classics into something new has been a delight. And by the looks of the packed dining room,  she’s going down a storm.

Dinner for two with sparkling water and a glass of wine came to €154.50