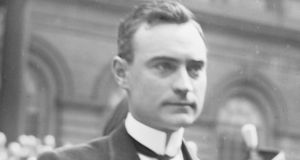 John Purroy Mitchel on May 11th, 1914 at the memorial for the Veracruz dead. Photograph: Wikimedia Commons

The Jacqueline Kennedy Onassis Reservoir lies at the heart of Central Park in New York City. A frequent backdrop to Hollywood movies, its 2.5 kilometre running track has also long been a favourite haunt of urban joggers. Bill Clinton, Madonna and Mrs Onassis herself were all known to complete a lap or two when they found themselves in the city, and did so under the ever watchful gaze of John Purroy Mitchel, the “Boy Mayor of New York”.

Mitchel’s granite and gilded bronze monument in Central Park may overlook the city he had the honour to lead, but his legacy runs far deeper. A staunch reformer, he fought to eliminate cronyism, corruption and inefficient practices across the five boroughs, and advocated for greater fiscal transparency. Described by his allies as hardworking, earnest, honest and independent, and by his enemies as quick tempered, dreary and elitist, he governed New York City during one of the most challenging periods of its history.

The grandson of the Irish nationalist leader John Mitchel, he grew up in the Bronx, studied diligently and had earned a degree in law by 1902. After he secured his first job as an attorney he was sent to British Guyana to investigate diamond claims by his employer where he would unfortunately contract malarial fever, an illness that would leave him plagued by intense, debilitating migraines for the rest of his life.

After he returned from South America he became an assistant corporation counsel and was appointed a Commissioner of Accounts in 1907. He would use this relatively minor office to become a thorn in the side of corrupt officials and politicians and his investigations would bring down some of the most senior figures in the city.

He began by examining the contracts and appointments awarded and dispensed by the president of the borough of Manhattan, John F Ahearn. He compiled over 3,000 pages of testimony which he distilled into a 158 page report. It found Ahearn guilty of awarding city contracts to friends and allies, promoting staff to positions they were unqualified for, and hiring far more staff than were necessary to fulfil municipal posts. The Governor of New York dismissed Ahearn on the basis of Mitchel’s report; it caused a media sensation. His investigations would also bring down the borough presidents of the Bronx, Queen’s and Brooklyn, but the latter was allowed to see out his term as he had only a month left in office.

Mitchel was quickly seen as someone who held the powerful to account, and this garnered him a lot of support from the opponents of Tammany Hall, a Democratic Party political machine that dominated New York politics from the mid-19th century. In 1909 he was elected president of the board of aldermen (a precursor to the modern city council), and was appointed director of the Port of NYC in 1913 by president Woodrow Wilson. The following year, a coalition of anti-Tammy Hall politicians chose him as their nominee, and he was elected 95th mayor of New York with the highest share of the vote ever received by a candidate up to that point. At the age of 34 he became the second youngest person ever to hold the office, and earned him the moniker the “Boy Mayor of New York”.

His mayoralty began on January 1st, 1914 amidst an economic downturn and a looming fiscal crisis, exasperated by rising tensions in Europe. Rising inflation led to discontentment among the urban poor; only three months into his term, a 71-year-old Irish immigrant, Michael P Mahoney, attempted to assassinate him as he climbed into his car but the bullet missed, grazing the chin of a city official instead.

On an administrative level he oversaw the creation of New York City’s first ever comprehensive municipal budget and cracked down on corruption in the NYPD. In 1916 he made New York the first city in the United States to bring in planning laws that limited the construction of skyscrapers and high rise buildings to designated commercial zones, which shaped the city we see today.

His attempts to cut teachers wages coupled with his insistence that “ethnic banners and flags” should not be flown in the city for the duration of the first World War (in order to reduce tensions between the city’s diverse communities) drew the ire of many. He would lose the 1917 election in a spectacular fashion to the Tammany Hall candidate, and departed the city almost immediately to enlist in the newly founded US Air Service, where he attained the rank of major. Only a few months during a routine training flight in Louisiana his plane went into a nose dive and he fell over 500 feet from the aircraft to his death below.

Hi funeral was a grand affair and he received full military honours; 20 aircraft showered the mourners with flowers as they marched along 5th Avenue to St Patrick’s Cathedral for a Requiem Mass.

More than 10,000 people lined the streets as the procession traversed the city and his pallbearers included his long-time friend, former US president Theodore Roosevelt. Roosevelt said of him “In all our country there was no finer American and no more upright and able public servant.”