What brought so many Irish people to live in Zimbabwe?

First St Patrick’s day celebrated on 1891 in a roofless mud-hut building with whiskey, gin and ham 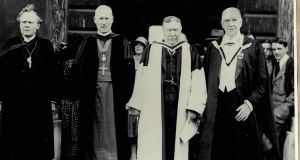 Arriving with my family to live in Harare, Zimbabwe almost four years ago, we were met by the then president of the Mashonaland Irish Association (MIA) and taken out for a typical “full Irish” breakfast in hot January sunshine the following morning. It was a warm Irish welcome and encouraged us to attend an MIA committee meeting the following month. I soon learned I’d been elected to the committee and later that year elected president, perhaps proving Woody Allen’s dictum that success in life is mostly about turning up.

I quickly became aware just how august and illustrious the MIA actually was. Not only is it the oldest expatriate association in the country, but it’s likely the oldest Irish association on the African continent. After my presidency, and aware we’d passed our 125th anniversary, I decided to compile and edit a book reflecting on the association’s history and in turn the contribution of the Irish to Zimbabwe, and visa versa. I received and encouraged articles from historians, scholars, writers, poets, musicians, missionaries and ex-MIA presidents. Items and pictures arrived from as far afield as Canada, and of course Ireland, and I became aware of a secondary Irish diaspora that of Irish people born in Rhodesia/Zimbabwe who had grown up here and subsequently left to settle elsewhere.

There were also a significant population of people who had come here for a number of decades but eventually packed up and left. The range of articles reflected the diversity of the Irish experience, and to begin with was an account of the first raucous St Patrick’s Day banquet celebrated in 1891.

In Irish chronological terms this might appear recent, but in colonial terms this predated the foundation of Southern Rhodesia, later Rhodesia and was a mere seven months after the Pioneer Column on expedition from south Africa, established camp at Fort Salisbury (now Harare) and raised the Union Jack on Cecil (now Africa Unity) Square.

Fort Salisbury from photographs of the period appears like a dusty sun-baked crossroads with a few brick and indigenous rondavel buildings. The banquet took place in a roofless mud-brick building, which when finished would become the first hotel in Salisbury. While conditions were primitive, the right spirit was in sufficient measure; wines, whiskey, Delagoa Bay gin and a ham were procured from the wagon of the aristocratic Compte de la Panouse who followed the column with his wares and delicacies. A copy of the hand written invitation bearing the words “Céad Mile Failte” and signed by the first MIA chairman, Sgt FKW Major Lyons-Montgomery, is reprinted in the book.

The MIA have celebrated St Patrick’s Day ever since and enhanced it with cultural programmes, charitable activities and support for the increasingly elderly Irish and people of Irish decent here. Articles received ranged from colonial Anglo-Irish to Jewish-Irish to people simply searching for a better life, or in the case of the religious, wanting to better people’s lives. Some of the material resurrected personalities or remembered our more famous daughters and sons.

One such example is Mother Patrick or Mary Ann Cosgrave, a Carmelite nun from Summerhill, Co Meath who sailed to south Africa in 1890 and spent a further year and a half travelling with five Sisters by ox-cart to Salisbury where she established a hospital and a school. Such was her selfless care for the sick, she was awarded the Royal Red Cross by Queen Victoria in 1898 but only two years later, at the age of 37, succumbed to tuberculosis.

She soon became part of the iconography of the oddly ecumenical Southern Rhodesia enhanced by an ailing Cecil Rhodes attending her funeral. Soon afterwards the MIA erected a Celtic cross, modelled after the one in Monasterboice near Drogheda, above her grave. As part of the St Patrick’s Day festivities a pilgrimage took place annually to her grave, which lasted until the 1970s.

Sir Charles Coghlan, the first prime minister of Southern Rhodesia,  would have headed up these pilgrimages in the 1920s. South African born Coghlan regarded himself as “a Catholic of Irish name and extraction”, shortly before he died in 1926 he was awarded an Honorary Degree in Trinity College, Dublin and was reputedly the first Catholic to be so awarded.

Posthumously, he was the last person interred in “World’s View”, Matopos in 1930 near the grave of Cecil Rhodes who decreed that the hill of stone, sacred to the Matabele, be a “Valhalla” for those who “deserved well of their country”.

Many settlers were simply adventurers, seeking a better life. The Rubenstein’s in response to growing anti-Semitism in Lithuania left for Ireland in the late 1870s, naturalised, and settled in “Little Jerusalem” in South Circular Road, Dublin.

At the turn of the century, they emigrated again to Southern Rhodesia and became an integral part of the burgeoning Jewish community in Bulawayo. Beverley Mathison remembers her grandmother in Bulawayo playing Irish tunes on her piano, her strong Irish accent and cooking Jewish and Irish dishes.

There are of course many more contemporary examples and one such is Ken Ryan’s account of coming out to Rhodesia the day after his wedding and creating a prosperous life here before tragedy in different guises struck. On return to Ireland in the 1980s he gets to have a second chance, flourishes and remains intensely loyal to Zimbabwe.

Finally, Prof Donal P McCracken contributes an essay superbly contextualising the Irish in southern Africa while Prof Donal Lowry in covering the period between 1910 and 2019 considers what he sees as colonial analogies and ethnic echoes in Rhodesia/Zimbabwe and Ireland in what he terms, “A mirror to Ireland’s face”.

The connections and threads between the two countries are manifest not just in the abundance of Irish place names here. Cumulatively, and beyond the stories of individuals, it’s a narrative that provides new insights into the layered complexity of the Irish and the colonial experience, and the adaption of the Irish first in Rhodesia and now Zimbabwe.

Joseph Woods is a poet and writer. The Mashonaland Irish Association, a Miscellany 1891-2019, is published by Weaver Press.