From the archive: In 1981, Maura O’Connell was voted the number one female singer by Hot Press 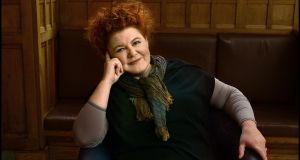 In 1981, Maura O’Connell was voted the number one female singer by Hot Press, a fact reported in The Irish Times. Anyone who recently witnessed the RTÉ Concert Orchestra performing A Woman’s Heart with O’Connell, Wallis Bird, Eleanor McEvoy and Mary Black will have been taken aback at how purely and strongly O’Connell’s voice has stood up almost 40 years after winning that award.

Writing in The Irish Times on March 5th, 1982, Imelda Devlin detailed upcoming folk concerts for March and April, a highlight of which was a non-date tour by De Danann, of which O’Connell was a member. Folk was changing, as Devlin pointed out. “Some purists would disagree with me I know, but I’m delighted to see Irish traditional musicians becoming more adventurous lately in their choice of songs, and broadening their come-all-ye appeal to include some classics.”

That November, Devlin was back writing about the Dublin scene including late-night concerts at Project Arts Centre and the Coffee Kitchen folk club on North Great George’s Street (in the building of the Laoismen’s Association). This article finished with a new chapter. “And finally, very strong rumours have it that two bands, Reel Union and De Danann, will not be seen for very much longer with their present line-ups and I also hear that Maura O’Connell, the marvellous lead singer with De Danann, is rehearsing a rock band. That could be the start of something very interesting.”

This week 35 years ago, on February 25th, 1985, a photograph appeared in the newspaper of Irish music stars, including Maura O’Connell, at Windmill Lane Studios, gathering to produce a record with proceeds going to famine relief in Ethiopia and Sudan. The group of musicians, calling themselves The Concerned, recorded a track called Show Some Concern, written by Paul Cleary of the Blades. Another De Dannan tour that year in May earned great reviews, including one from George D Hodnett in the newspaper. Dolores Keane was back touring with the band, although O’Connell was showing up to sing Maggie.

In July, it was Live Aid. There were the landmark concerts, of course, but also the fundraising over telephones and transmitted via television. Elgy Gillespie wrote a piece titled How RTÉ organised the chaos. “Niall Matthews RTÉ – the man credited by Geldof with inventing the ‘telethon’ and Freefone system of collecting aid – faced a series of technical difficulties, as 16 hours of Wembley and Philadelphia footage was dovetailed alongside raffles for items such as Brendan Grace’s knickers (‘if these underpants could only speak . . .’) and Garret FitzGerald’s tie (£500). ‘How will I go back to ordinary programmes after an event like this?’ he sighed yesterday, after the three weeks of breakneck organising were over . . . The party atmosphere did not detract from the efficiency of RTÉ’s ‘organised chaos.’ While celebrities like Tony Kenny and Maureen Potter took calls all day, others like singer Maura O’Connell and the TV presenters Flo McSweeney and Liam Mackey helped by taking out refreshments to the AIB caravan outside Montrose, where Noelle Keane and her voluntary staff stayed open until after 4am and co-ordinated news from the 82 AIB branches.”

By December 1987, O’Connell’s solo recordings were mentioned as among those doing the business in a recessionary anomaly in Ireland – record sales. “Perhaps the main incentive for HMV Records to set up shop here was the significantly high number of young adults per head of the population, much higher in Ireland than in Great Britain and, indeed, than in any other European country. That’s the market HMV depends on to fill their coffers,” Mirette Hanley wrote in an advertising feature marking the shop’s first year in Ireland.

Of course, 1992 stands out in O’Connell’s career and in the Irish music industry when the landscape of Irish record sales was changed forever. A compilation album was released that summer, featuring McEvoy, Keane, Mary Black, Sharon Shannon, Frances Black, and O’Connell. On the album, A Woman’s Heart, O’Connell’s performed Summerfly and Living in These Troubled Times. The record sold more than any other album in the history of the Irish charts, more than 750,000 copies. There was one album sold for every 4½ people living in Ireland at the time, meaning pretty much every household in the country had a copy.

TV Guide: 29 of the best shows to watch this week
2

One of most powerful images of War of Independence
5