Flying home for Christmas: 'It's always great coming back to Dublin'

Irish emigrants reunite with loved ones as 1.2m people are expected to travel through Dublin Airport over the festive period

There were emotional scenes at Dublin Airport as thousands of Irish people living abroad returned home for Christmas to be greeted by family and friends. Video: Bryan O'Brien 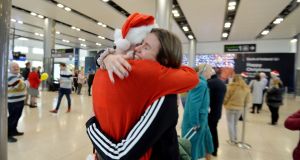 Briain McGeary dressed as Santa embraces his sister Brónagh on her arrival back from Vancouver after one year. Photograph: Alan Betson / The Irish Times

For Briain McGeary, the most appropriate way to welcome his sister home for the holidays was by dressing up in a Santa costume when he met her in the airport.

Standing in Terminal 2 of Dublin Airport on Friday morning, Mr McGeary let out a loud cheer when his sister Brónagh McGeary, and her boyfriend Paul Dean, came into sight.

“You have to have a bit of joy about it, it’s such a happy time,” Mr McGeary said. “We’re just going to chill, have some family time now that we’re all back together.”

Ms McGeary, who moved to Vancouver, Canada in August 2018 for work, said despite the embarrassment of her brother’s attire, she was delighted to be home. “We had been looking forward to it for awhile. It’s exciting,” she said.

“And he missed his mother’s cooking, of course,” his mother, Muriel, chimed in.

There was a festive flurry across both terminals in the airport on Friday morning, as thousands of people returned home for the holiday season.

Travellers were greeted by tinsel, trees and lights in almost every crevice of the buildings, as well as Christmas music, sung by a school choir from St Cronan’s junior school in Swords, Co Dublin.

Dublin Airport said that this Christmas will be its busiest ever, with almost 1.2 million people expected to arrive and depart from the airport over the festive period.

She said the airport can be a magical place during the Christmas period.

“Over the years we have had a number of Christmas marriage proposals, and every year we have grandparents seeing their grandchildren in the flesh for the first time – whether that be Irish emigrants returning home or people from overseas visiting their family here in Ireland, ” she said.

“Increasingly, those waiting to meet their loved ones at Dublin Airport are entering into the spirit of Christmas by dressing up and making signs to welcome family and friends.”

The McGeary family weren’t the only ones who were excited about reuniting with family members.

Margaret Hopkins from Rathfarnham, Co Dublin wore a red tinsel scarf and a hat as she waited in the arrivals hall.

She was collecting her son Niall, who has lived in Cape Cod in Boston for the past 25 years, and her three grandchildren Oisín (19), Séamus (16) and Michaela (14).

“They’ve never been to Ireland for Christmas so it’s their first Christmas here, which is great. Their other grandparents, it’s great for them, because the father’s not well so it’s even better again. They’ll be delighted,” she added.

It wasn’t just the friends and family members of emigrants who were getting dressed up. In the case of Alan White, who moved to Boston 20 years ago, and was wearing an elf costume, dressing up is an important part of his Christmas tradition.

“I dress up every year for Christmas. I love coming home. There’s nothing better than an Irish Christmas. I’m looking forward to seeing mum and dad and my sister and brother-in-law,” Mr White said.

“I get emotional coming here and seeing other families reconnecting, but it’s also a great, happy time to be back at home. My life in Boston is great, it’s home for me now, but it’s always great coming back to Dublin.”

The excitement in the air was palpable, but nothing compared to the elation on the faces of family members who were about to spend Christmas with young children.

“I’m very excited. I’ve been preparing for them for the past two months, and we’ll have lots of excitement in the house. I’ve been getting all the food in, making sure Santa would come to the house. It brings back memories of our own childhood Christmasses, which were always very nice,” she said.