Christmas goodbyes: ‘The hardest part is when you don’t have a date to meet again’

Tears at Dublin Airport as emigrants leave after holidays with family

December 29th, 2019: Families say farewell to their loved ones at Dublin Airport following their return home for Christmas. 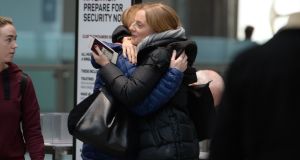 Dublin Airport was awash with tearful mammies on Sunday morning as many families began saying farewell to their loved ones following their return home for Christmas.

The mood was sombre, and in sharp contrast with the joyous atmosphere of the arrivals hall in the week leading up to December 25th.

Standing at the departure gates of Terminal 2, Carmel Penrose and Tom Farrelly, whose son Aodán has lived in Vancouver, Canada for the past two years, said the hardest part of having him home was having to say goodbye again once the celebrations were over.

“This was his first Christmas home since he moved. I had cancer in my left eye, I had it taken out six weeks ago, so he surprised us by coming home,” Mr Farrelly said. “It was a brilliant lift to see him, we had a tough couple of months.”

Mr Farrelly added: “In the weeks coming up to Christmas you see all these happy images, carol singing and welcoming everybody, but this is the other side of it. He lives so far. There are people whose sons and daughters live in London and you can go over anytime you want. We can’t do that.”

Ms Penrose said: “The hardest part is when you don’t have a date to meet again and we don’t have anything at the moment.”

Alice Brady, whose daughter Emma Brady was flying back to Austin, Texas, in the US, said her daughter had lived abroad for almost three years but that saying goodbye never got easier.

“I love picking them up from the airport, but I hate going back,” Ms Brady said. “It’s good that we get to see them, and we know they’re happy over there but it’s tough as well.”

Bernard Brady, her husband, said while they can’t come home every year, it really does make Christmas when they do.

“It’s a really nice bonus. They can’t make it home every year, because it depends on finances and stuff. It really makes Christmas. We had a full house,” he added.

Patrick and Fiona O’Sullivan were dropping off their son Rory, their daughter-in-law Catherine and their grandson Brendan for their flight home to Missouri in the United States.

Mr O’Sullivan said that having their grandson, who is one-and-a-half years old, over for Christmas made the day feel extra special.

“It’s sad but we had such a wonderful week together,” he added.

Niamh Wilson, who was returning to New York city where she has been living since the summer, was engulfed in a hug by her two parents, Bronagh and Michael, before she caught her flight.

“I am excited to go back but I’m still sad. It’s bittersweet,” Ms Wilson said.

Her father added: “When we picked her up a week ago at half five in the morning we had the dog with us in a Christmas jumper. He was the first to get a hug and the last to get a hug, so she’ll probably miss the dog the most.”