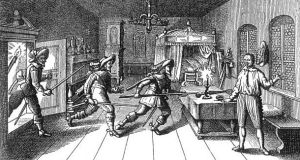 Walter Butler, a descendant of the Roscrea branch of the Earls of Ormond who owned Kilkenny Castle, died on Christmas Day in 1634 while fighting in southern Germany for Emperor Ferdinand II.

Butler was an archetypical “wild goose” who had left Tipperary in 1616 after his Ballynakill estate was seized by the crown and joined the Imperial army of the Habsburgs. There he enlisted in his kinsman James Butler’s regiment and saw service in Poland. He would spend the next 18 years fighting for the Habsburg dynasty in what became known as the Thirty Years War, a conflict for continental supremacy between France and the Protestant Union on one side and the Habsburg dominated Catholic League on the other. A costly war, it would lead to the deaths of more than eight million people.

Within the Imperial forces Butler rose through the ranks to become an Oberst (Colonel) of Dragoons and famously defended the walled city of Frankfurt-on-Oder from the Swedish Warrior-King Gustavus Adolphus II in 1631. Another Irishman, Colonel Robert Munro who was serving with the Swedish forces, tells us that during the siege Butler is said to have repelled several Swedish assaults, halted two retreats and was only finally taken prisoner after most of the Irishmen had fallen and he himself was “shot in the arm and pierced with a pike through the thigh”. He was imprisoned for six months until he eventually purchased his freedom.

During this time his enemies at the Habsburg court cited his surrender of the city as evidence of his cowardice, in an attempt to have him expelled from the army and tried for treason. However, Butler requested and duly received, a personal testimonial of valour from the Swedish monarch counter-signed by all of his generals which, upon his release, he presented in person to the Emperor in Vienna. Ferdinand dismissed the charges. With his reputation vindicated and his rank restored he re-joined his regiment and went on to win a crushing victory for the Habsburgs at the Battle of Eger soon after he married the wealthy Countess of Fondana in the winter of 1632.

His best known feat occurred in 1634 when he foiled a plot by Imperial Field Marshal Albrecht von Wallenstein to betray the empire and seize the throne. Von Wallenstein offered Butler command of two well paid regiments, and other generous incentives to join his cause, which Butler outwardly agreed to do. However, he dispatched a letter to an imperial agent stating he was being coerced into obeying von Wallenstein’s orders and remained loyal to Emperor Ferdinand.

Knowing that von Wallenstein’s cause was a lost one Butler covertly replaced 100 of the guards stationed in the town of Eger with Irish dragoons personally loyal to him and his allies. On the night of February 25th, 1634 during a banquet at Eger Castle, which he and two fellow conspirators were attending, he had his men infiltrate the castle and kill most of von Wallenstein’s closest allies before assassinating the traitorous marshal, who had been sleeping in the Burgomaster’s house. He then seized the town and made its inhabitants pledge loyalty to the crown.

For this act of loyalty to the crown the Emperor rewarded Oberst Butler with the title of Graf (Count), appointed him an imperial chamberlain and gave him an estate at Friedberg, Germany. However he would only enjoy these rewards for a short time before dying in the Battle of Schorndorf on December 25th of that year. A devout Catholic and a zealous solider of the counter-reformation he was also a generous patron of several monastic orders and in his will he left 20,000 Thalers (dollars) to the Franciscans on condition that they use it to counter the spread of Protestantism in Ireland. His descendants still live in Germany.

Butler, like many other exiled and dispossessed Irish nobles sought to make a name for himself, ensure his hereditary status as an aristocrat was recognised, win the favour of his patrons and wished to fight for his own religious beliefs. His assassination of von Wallenstein reputedly raised the imperial estimation of the Irish at the Habsburg court and according to an Irish Franciscan friar resident in the empire “made our county and nation [IRELAND], otherwise quite unheard of here, most famous and well known”.