'Niall Horan, Colin Farrell and PS I Love You have helped single Irishmen all around the world' 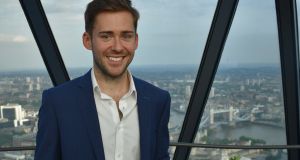 Ciaran Doyle, who is originally from Co Clare, but currently lives in London on working as a Fitness to Practice Investigator

Working Abroad Q&A: Originally from Co Clare, Ciaran Doyle lives in London where he works as a fitness to practice investigator with the medical profession.

I left on June 3rd, 2011. I’ve still got the boarding pass. The previous year I finished my law degree in NUI Galway and the employment prospects in Ireland were very poor at the time, so I decided to follow a family tradition and move to London to begin my career. I can remember walking out of the arrivals gate at Heathrow with no job, apartment, bank account or return flight, feeling like Nigel Farage’s nightmare come to life - and loving it.

Tell us about your career.

I had never considered working in healthcare regulation prior to moving to London, but that may be due to the industry being in its infancy. Before Harold Shipman (the GP who murdered 215 patients and was sentenced to life imprisonment for his crimes), the industry or legislation wasn’t as developed. I had a meeting with a recruiter when I first moved here who placed me in my first role with the General Pharmaceutical Council, investigating allegations relating to pharmacists. These investigations are not to establish if a medical practitioner has done something wrong, but to see if they pose a risk to patients if they are to be allowed to continue to work in that field.

I’ve been working for the Health and Care Professions Council (HCPC) since 2015, investigating people working in 16 different healthcare professions. One day I might be liaising with the London Metropolitan Police or the National Crime Agency to obtain witness statements or CCTV, or providing advice on how an investigation should proceed, and the next day I could be presenting a hearing on behalf of the HCPC, cross-examining a radiographer or an occupational therapist. This is the most enjoyable part of the job, having to think on your feet and put across a compelling argument often in light of evidence which you might have seen in the previous hour and arguing against experienced barristers or solicitors.

Have you done any training or studying there or anywhere else?

Prior to my current job, I had no experience of advocacy, but my employer sent new members of staff on a course about how to present a hearing effectively. This involved being grilled by trainers for a few days in a mock courtroom scenario. However, I’ve mostly learned on the job from colleagues, some of whom are former senior police officers or highly experienced lawyers, or have previously worked for the United Nations. The range of experience in the people you’ll meet here is incredible.

What has it been like living in the UK?

It was one of the best decisions I’ve ever made. I’ve met the love of my life, my fiancé Vicki, and had a chance to meet people I wouldn’t normally have come across. If you are thinking of making the move and have any doubts, it is normal to be a bit apprehensive, but stop waiting for the perfect time and just take the plunge. Ireland is just one hour away.

There’s actually very few. Some of the Irish people I have met over here tend to stick to friendship groups either from back home, or ones they meet in social circles here that have a lot of Irish people in them. I understand the temptation of having an Irish circle of friends here at the beginning, but I also know that stepping a little bit outside that comfort zone socially can pay off.

Do the Irish fit in well in London?

Incredibly well. The accent is considered synonymous with friendliness - it really does open all kinds of doors. Niall Horan, Colin Farrell and the film adaptation of PS I Love You have helped single Irishmen all around the world more than we will ever know.

You are going to Portugal in May. Why?

Myself and Vicki wanted to take on a new adventure that brings us outside of our comfort zones. She’s a writer, so she can work pretty much anywhere with a decent internet connection. As for me, I am going to explore how best to capitalise on my experience and explore remote opportunities within regulation. It’s terrifying and exciting in equal measure. It is interesting to see this industry begin to move towards remote working as both employers and their staff recognise the mutual benefits.

Has Brexit played a part in your decision?

Surprisingly, no. If the referendum went the other way in 2016, it’s reasonable to assume that we would still want to take on something like this move.

If you wanted to come and work in Ireland, what are the opportunities like for your chosen career?

Much better than in 2011 I believe. From time to time I will take a look at positions with organisations such as the Garda Síochána Ombudsman Commission, HIQA or CORU. I know from listening to my friends in Dublin that career prospects in Ireland are now much better than when I left, but so far I have not felt the urge to move back to Ireland.

I miss my friends and family all the time. I have tried to keep friendships fresh as much as I can and to keep that link as strong as ever. Besides the people I miss, I miss the Atlantic Ocean, the clean, fresh air and the scenery. Ireland is like nowhere else on earth and there are few things in life that excite me as much as the prospect of the next trip back home.

London Fashion Week: Paul Costelloe back in form with a little help from his son
Real news has value SUBSCRIBE