Wild Geese: ‘California has truly been the land of opportunity’ 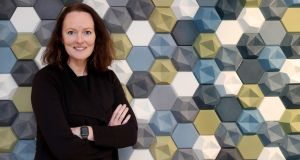 Carmel Galvin: “I think networking is in our [Irish] DNA and people are very willing to share best practices and to help others who are trying to get a foothold here.”

Carmel Galvin left Ireland in 1994 in search of adventure.

Opportunities at home were limited at the time and, despite having landed herself a job with IBM, America’s west coast looked a lot more appealing than staying at home to the young Trinity College business studies graduate.

Some 25 years later and Galvin, who is chief human resources officer at software multinational Autodesk, is at the top of the HR ladder having progressed her career with companies such as Deloitte, Advent Software and MSCI Barra. Galvin is in no doubt that moving to the States was the right decision for her.

“Part of the original reason for coming here was my desire to build a varied set of professional experiences and this goal was going to be better supported by being in a larger working environment,” she says.

“Ireland has changed a lot since then of course and I think you can now get a comparable quality of experience in both places, but the scale is still different and there are still more roles available in the United States.

“In my case California has truly been the land of opportunity. It is amazing to be surrounded by so much innovation and I enjoy the pace. I am based in San Francisco which is such a multicultural city and this adds a richness to my daily life.”

Autodesk has recently located its European headquarters in Dublin and the company, which has more than 100 offices worldwide, employs 180 at its base in Windmill Lane.

“With our European HQ in Dublin, I get the best of both worlds, living in San Francisco and travelling home regularly for work,” Galvin says.

“We have three teenage daughters so we’re well established in America but we’ve always made a point of going back a lot to see family and friends.”

Prior to joining Autodesk in 2018, Galvin was head of people-related functions at recruitment company, Glassdoor, which is probably best known for providing the inside track on employers. Glassdoor’s site is visited by millions of people every month.

Has this exposure to such frank views about employers and employment given Galvin an insight into what really makes people want to stay with or leave an organisation?

“It seems to come down to three things,” she says. “The first is the quality of the leadership, the second is the organisational culture and the third is career development opportunities. Compensation and perks, such as free food, are not the things that make people stay. This seems to apply regardless of the size of the organisation.

“How important benefits are also varies depending on people’s stage in life. Employees the world over essentially want to make an impact, to do interesting work and to be able to develop their careers.”

Despite being out of Ireland for a long time, Galvin has maintained very close links with home through the Irish community in America.

“I think networking is in our DNA and people are very willing to share best practices and to help others who are trying to get a foothold here,” she says.

“As a result, I’ve found it very easy to maintain our connection to home. Enterprise Ireland and the IDA also do a good job of keeping the business communities on both sides of the ocean well connected.

“My husband is Irish – we went to college together and came here together – and we connected to the significant Irish immigrant community in San Francisco early on including the Irish Immigration Pastoral Centre, which is a not-for-profit, volunteer-managed organisation assisting immigrants in the San Francisco Bay Area. We’re also involved in the Trinity College alumni network here which is very active.”

When asked if there are significant differences for HR professionals and companies operating in different countries, Galvin says; “In the field of human resources, I think there are more similarities than differences between countries although, having said that, the global variety of legislative backdrops can be very impactful on an international business. For example, the nature of the legal employment relationship can vary widely.”

Having spent all of her career to date in HR, Galvin has seen the role change markedly over time.

“I think the biggest change is that the job has evolved from being primarily about support to becoming a critical, strategic function and with increased automation set to transform the workplace as we know it, I believe HR will play a critical role in positioning companies to address the myriad challenges related to the development of new skills and experiences,” she says.

“Changing worker expectations around the role their organisations play in the broader community are also shifting and presenting new challenges. A company’s point of view on significant cultural and political issues is becoming more and more important to employees, and HR needs to help drive those important conversations within the company.”

Galvin travels a lot with her job and unwinds by running, biking, swimming and hiking but running is her preferred option.

“I prioritise it in my day, because if you don’t, it gets overtaken by events and it is the first thing to go,” she says.

“I think it’s important to invest in yourself and to maintain your health and fitness and I plan my schedule with that in mind. When at all possible I try to run with friends so it’s also a social event.”

4 The right time, the right medium and the right people make Clubhouse a hit

8 Ireland can ‘almost halve’ the cost of renewable electricity

10 Benefits of data protection regulation come at a price