How did Irish single mothers fare after emigrating to Britain? 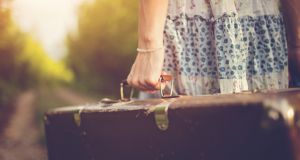 Migrating to Britain may appear to be a pragmatic choice in hindsight, but we know very little about how the women who chose to do so fared after leaving.

In the early years of the Irish Free State, social stigma towards unmarried motherhood left limited State assistance or public support for single mothers and their children. An unmarried mothers allowance was not introduced in Ireland until 1973. While some single mothers may have been supported by their families, those who were not faced inequities on many fronts.

The ill acceptance of single motherhood in Irish society meant women were faced with few options. Entering a mother and baby home run by a religious congregation was one of the only forms of assistance available to single mothers in early independent Ireland, which rendered them secluded from the rest of society, and living under restrictive regimes.

Adoption was not legal until 1952, but informal adoptions still took place within mother and baby homes organised by the religious congregations. Issues around the mother’s consent of these adoptions have come to light in recent years, thrust forward by the stories of women such as Philomena Lee recounted in the media, and in books and film.

Without the support of a relative or friend, it was almost impossible for a single mother and her child to remain together. Some women worked and paid for the boarding out or fostering of their child. Through this arrangement, the child had the chance to experience life within a family home, but they were away from their mother and some may have been mistreated.

So what other options did unmarried Irish women have if they became pregnant? Migrating to Britain may appear to be a pragmatic choice in hindsight, but we know very little about how the women who chose to do so fared after leaving. As a single mother and an immigrant in Britain, did they face further stigmatisation? Did they keep and raise their child there? Did they face the same limited options and challenges as they did back home? Or was society more accepting?

I am currently working on a research project at NUI Galway which aims to answer some of these questions. The research involves critical analysis of archive material from religious and philanthropic organisations involved in the care of single mothers, by providing advice and information, accommodation, as well as maternity care and adoption services.

It will also include interviews with women who travelled as single mothers to Britain between 1926 and 1985. Their stories will form the central narrative of the project.

Following the discovery of the mass grave at the mother and baby home in Tuam, the Government established a Commission of Investigation into Mother and Baby Homes in 2015. While this has been a positive step, the Commission has been criticised for excluding some of the many facets of the story, including the experiences of women who travelled to Britain after becoming pregnant.

This new research is important not only for individual Irish women and families affected, but also for Irish society as we work for full justice for all those impacted by institutionalisation and the stigmatisation of unmarried motherhood in the past. The historiography of single motherhood in Ireland is also imperative to our understanding of present support structures for single parents today.

If you are an Irish woman from either the Republic or Northern Ireland who migrated as a single mother to the UK on a short term or long term basis between the years 1926 and 1985, I would like to hear from you. Please email me at l.grimes2@nuigalway.ie if you are interested in becoming an oral history participant, or for more information on the project. Confidentiality will be guaranteed.