Steal a pig in Tipperary in 1841? You could be shipped off to Australia 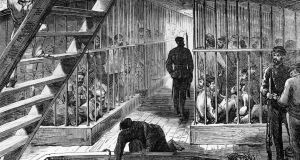 Steal a pig in Tipperary in 1841, and you could be sentenced to Australia to serve out your punishment, which was the fate that awaited 21-year-old labourer John “Red” Kelly after his conviction. Upon his release from incarceration in Van Diemen’s Land (now known as Tasmania), Kelly went on to father one of Australia’s most notorious outlaws, Ned Kelly.

Kelly is just one of an estimated half a million Irish people transported to Australia between 1788 and 1921, according to the National Museum of Australia. The account of his crime and journey down under is one of thousands of records available to search online as part of the Australian Convict Collection, a new project by the genealogy company Ancestry.ie.

The compilation of over 140 years of historic records was the result of research undertaken by the company to mark the 250th anniversary of Captain James Cook’s departure from the UK, a journey which eventually brought him to the shores of Australia. The stories reveal much about the convicts’ origins, their crimes and punishments, and what happened to them in the years that followed.

Timothy Coleman, for example, was a married tailor from Co Cork convicted of murder in 1839. He arrived to New South Wales in February 1840 to complete his sentence. His arrival documents read that he had, “front upper teeth prominent, scar back of left ear, breast and arm freckled, left foot much smaller than right, left leg short”.

Dublin maids Ellen Howard, born in 1815, and her younger sister Rose Connolly (nee. Howard), were convicted and sentenced to seven years in prison for shoplifting in 1840. Both women had previous convictions, and had served three months each in prison for unknown crimes. They set sail to New South Wales on the ship the Margaret. Ellen “had dark brown hair. Mark of burn on lower part of left side of her cheek. Nail of forefinger of left hand disfigured.” Rose is described as “sallow and pockpitted. Has brown hair. Mark of a burn on her left hand. Two scars on the back of her left thumb”.

Bridget Feeny, originally from Co Roscommon, was working as a kitchen maid in Co Westmeath when she was found guilty at the age of 18 of stealing shoes. She was sentenced to Australia for seven years, arriving in New South Wales in July 1840. Her convict and transportation documents describe her as “ruddy, freckled and slightly pockpitted. Had light sandy brown hair. Scar on her nose and two moles on her throat.” Her certificate of release was issued on September 27th, 1847.

Alexander Humphreys was similarly described in arrival documentation as “ruddy and freckled”. Born in Co Fermanagh, he was a labourer convicted of stealing potatoes, and faced a seven year prison sentence. He was sent to New South Wales, leaving his wife and five children behind in Ireland.

According to Ancestry.ie genealogist Joe Buggy, families were often separated as a result of their loved ones’ sentencing to prison in Australia, and many would start a new life in their new country after release. It was common for them to request that their family be brought to join them in Australia, at the government’s expense.

Records of wives and children who were subsequently transferred are also included in the Australian Convict Collection, which “allows families to answer some of the unanswered questions about how and why their relatives ended up in Australia”, according to Buggy.

Many of Australia’s new inhabitants continued a life of crime on release.

To explore the Australian Convict Collections, you must be registered with Ancestry.ie. Users can sign up for a 14-day free trial; just remember to cancel the credit card payment after browsing if you don’t want to be charged.

Alternatively, hundreds of thousands of original documents relating to the convicts who arrived in Australia from 1788 to 1873 are available in the Convicts Index on the NSW State Archives and Records website at records.nsw.gov.au.

Coronavirus anxiety keeping you awake? Here's how to get more sleep
4