Bly went around the world in 72 days in 1889, beating Phileas Fogg's fictitious record 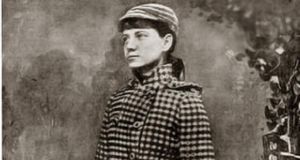 Nellie Bly set a world record for circumnavigating the globe in 72 days, 6 hours, 11 minutes and 14 seconds.

Insane asylums, ghost houses, gambling dens, illicit pawnbrokers and Chinese leper colonies. These are but a handful of the unusual locations the determined investigative journalist ‘Nellie Bly’ found herself in in pursuit of a good story. She continually pushed the boundaries of her vocation and gave a voice to those all too often left voiceless - the poor, the socially disadvantaged, women and those affected by war.

Originally known as Elizabeth Jane Cochran, she was born in Pennsylvania amid the turmoil of the American Civil War in a small township named in honour of her family, Cochran’s Mill. She was the granddaughter of a Robert Cochran who had arrived in the fledgling United States from Derry in the 1790s. Her father rose to prominence as a member of the judiciary, but tragically died while Elizabeth was only six years of age, after which her family struggled financially.

Yet she was determined to make a name for herself, and at 19, found her calling as a writer and journalist. After a brief apprenticeship with the Pittsburgh Dispatch (where she adopted the Nellie Bly alias), she joined the staff of the New York World where she would remain for the next 11 years. It was here she met Joseph Pulitzer, the paper’s owner and manager, after whom the preeminent prizes for journalism are still named.

He encouraged her to focus on sensationalist stories that would increase the circulation of the paper. Bly was often willing to go to lengths most other journalists would shy away from. Most of her pieces had broad appeal and often sparked a public outcry against the injustices cited within.

Her first major scoop was an exposé on the mistreatment of patients at the Blackwell’s Island Women’s Lunatic Asylum for which she feigned madness to gain admission to the facility. She was incarcerated for 10 days, and witnessed the harsh manner in which the nurses and doctors of the institution abused their charges:

“They inject so much morphine and chloral that the patients are made crazy. I have seen the patients’ wild for water from the effect of the drugs, and the nurses would refuse it to them. I have heard women beg for a whole night for one drop and it was not given them. I myself cried for water until my mouth was so parched and dry that I could not speak.”

The ease with which she fooled the medical professionals, coupled with the grievous malpractices highlighted in her article and later report, led to a grand jury investigation of Blackwell’s, and made Bly a minor celebrity. Over the next ten years she would go on to expose a litany of abuses in the city’s jails, factories, orphanages and tenements, usually while in disguise or operating under a false identity.

But Bly is best remembered today for her 1889 attempt to circumnavigate the world and break the fictitious record of Jules Verne’s Phileas Fogg. Around the World in Eighty Days had been a smash hit, and Pulitzer was a keen supporter of the enterprise, realising the unprecedented publicity it would attract. Her expedition captured the popular imagination of the world, and soon she wasn’t just competing against the clock, but against a rival adventurer, Elizabeth Bisland from Cosmopolitan, who was despatched in the opposite direction in the hopes of beating Bly.

The New York World ran daily updates on her journey which would take her through Great Britain, France (where she met with Jules Verne), Italy, Egypt, Sri Lanka, Malaysia, Singapore, China, and Japan, before finally arriving back in the US. She landed in San Francisco two days behind schedule but Pulitzer arranged for a chartered train dubbed the ‘Miss Nellie Bly Special’ to take her to Chicago. She made her triumphal return to New Jersey on January 25th, 1890 to huge crowds. Her total journey time? 72 days, 6 hours, 11 minutes and 14 seconds - a new world record!

In the end, it was a close run thing. Her rival, Miss Bisland, had missed her steamship from Southampton, and was forced to take the much slower Bothnia from Cobh, ensuring her defeat. She would arrive back less than four days later.

Bly’s achievement was celebrated across the world - it even spawned a popular board game, and she later published a bestselling account of her journey, Around the World in 72 Days, while Bisland was largely forgotten. The two rivals would ironically finally meet in death - both are buried in Woodlawn Cemetery in the Bronx.

This Extraordinary Emigrants article was written by Nathan Mannion, senior curator of EPIC The Irish Emigration Museum  in Dublin’s Docklands, an interactive museum that tells the story of how the Irish shaped and influenced the world.