Clever songsmith’s irreverent wit was informed by his fluent Irish 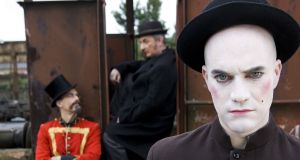 Images of Johnny Patterson, Ireland’s famous singing clown, often betray a certain wistfulness around the eyes, as if he was a man born with a strong sense that life held sorrow, as well as success, in store.

Born John Francis Patterson in 1840 in Kilbarron, Co Clare, both his parents died by the time he was three. Johnny was sent to live with a surviving uncle in the town of Ennis.

Showing musical talent from an early age, Patterson was enrolled by his uncle in the army at 14 as a drummer boy. While stationed with the 63rd Regiment of Foot at Limerick, he began to compose his first songs. After five years, he joined John Swallow’s circus, where he took the opportunity to showcase his act of songs and jokes. Audiences warmed to nostalgic songs and repartee which recalled a happy, pre-famine Ireland, such as ‘The Stone Outside Dan Murphy’s Door’.

The sense of yearning for a lost home-place appealed to audiences further afield, and Patterson toured England from 1867-1872. Arriving first in Liverpool to work with the Pablo Fanque Circus, he reconnected with a Scottish brother and sister bare-back riding team with whom he’d been friendly in his earlier circus days, James and Selena Hickey. Patterson and Selena married in Liverpool, and their first child was born in 1870.

By 1875, Patterson had returned to Ireland to settle in Belfast, the proud father of three children: Bridget, Nora, and Johnny Junior, and the author of songs still known today such as ‘The Garden Where the Praties Grow’. The latter charted his romancing of Selena, and finished with a verse added after the birth of his three children; Patterson’s songs, like his stage presence, created a sense of warmth and intimacy that was hard to resist, especially for those far from home.

Patterson sported a hybridized clown costume, integrating European clowning elements into his look, such as the conical hat of the harlequin and Pierrot’s melancholic, white-painted face with a costume more Irish in tone; a suit of tweed embroidered with harps and shamrocks.

He was a clever songsmith as well as a sentimentalist, and his songs demonstrate a linguistic dexterity and irreverent wit informed by his fluent Irish. Research undertaken by Clare County Library shows that ‘The Dingle Puck Goat’ (‘An Poc ar Buile’) in Patterson’s original version, has a romantic flight and a fluent use of Hiberno-English that might have made John Millington Synge jealous:

“He’s bate all the bailiffs, the Maguls and the Caliphs,

All the shulers and rulers from Cork to Bagdad,

He’d made them cut capers to put in the papers,

With one puck from his horn, he would drive them all mad.

For that bright Saxon shilling he never was willing

Still he’d go to the polls for ould Ireland to vote,

Patterson made a lasting impression on artists of the day, and, Jack B Yeats would paint him a number of times; a sad, ghostly presence surrounded by a rapt audience in works such as ‘Johnny Patterson Singing Bridget Donoghue’ (1928). Yeats saw Patterson perform a number of times as a child and obviously, something of the strange public-private relationship of artists with their audiences chimed with him.

Patterson’s star was on the rise in the 1870s, and he travelled to New York in 1876, leaving Selena and his children behind him. This was the beginning of a triumphant period of touring the States with Bailey and Cooper’s Great London Circus, to rave reviews. In the 1880s he would return to Ireland, but a worsening drinking habit and a business partnership with another drinker, John Keeley, would result in diminishing fortunes.

Rowing in behind the Parnellite movement, Patterson wrote a song called ‘Do Your Best for One Another’, now lost, which asked Irish men and women to overcome sectarian division. However, this admirable ideal would prove unpalatable to Irish audiences in 1889. In a performance in Tralee, the audience rioted, and he was hit in the head with an iron bar. He was taken to the fever hospital where he died, some days later, of pneumonia.

This was a sad ending for a man of whom The New York Dispatch had said, “The songs written by Patterson are full of real Irish humour, and unlike many other so called delineators of Irish character, he tries to elevate his fellow countrymen in the eyes of the public, rather than degrade them”. However, despite his tragic death, Patterson had made his mark on the world, and is remembered now as man who transcended stereotypes, while bringing joy to many.

This Extraordinary Emigrants article was written by Jessica Traynor, deputy museum director at EPIC The Irish Emigration Museum (epicchq.com) in Dublin’s Docklands, an interactive museum that tells the story of how the Irish shaped and influenced the world.

Paddy Holohan: ‘MMA was a liferaft to grab onto’
5