London’s Irish pubs: all the lonely people, where they go to belong 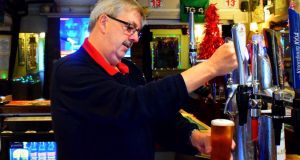 Pat Logue, landlord of the Sheephaven Bay in Mornington Crescent

I have always had a curious fascination with Irish pubs abroad. Not the big bars like O’Lunneys of Times Square where tourists, NYPD, and locals mix in happy harmony. Nor the ones along the main strips in Tenerife or Lanzarote. I mean the small pubs dotted around the suburbs of big cities, catering primarily to first and second generation Irish; usually those who emigrated by necessity rather than by choice, who continue to long for Ireland. The pubs that are home to the lonely.

I was first drawn to them when I lived in Sydney. I’d regularly pass The Tea Gardens or the (now closed) Cock’n’Bull in Bondi Junction, and wonder why so many spent their Sundays in darkness when glorious sunshine and a beach awaited them outside. Why had people travelled halfway round the world to sit in an Irish bar with other Irish people drinking Irish pints?

In the southern hemisphere at lest, I concluded, the bars must fulfil a need to feel closer to home.

I moved to London six years ago and lived in Camden in north London, once the epicentre of the city’s Irish community, and still home to the London Irish Centre. As I walked home from work, I’d look in the window of O’Reilly’s in Kentish Town and wonder about the older men sitting in the same seats night after night. They seemed to rarely speak to each other except for the odd pleasantry and cursory nods. They weren’t there together, but they weren’t there alone either.

Stepping over the threshold of some of the Irish pubs around Kilburn and Archway was like slipping through a vortex. They weren’t playing up their Irishness in a novelty way, but to me, they felt more Irish than any pub in Ireland. Or maybe I was getting a glimpse of an Ireland I never knew, the Ireland before my time: showbands, corduroy suits, and women sitting in snugs while men propped up the bar. It reminded me of Harp ads from the 1980s. It felt as if they had emigrated from Ireland more than 40 years ago but had never really left the Ireland of years gone by.

I wondered about the people who came to these places and what these pubs meant to them. What kind of solace were they searching for? And did they realise that even though this was the social life they remembered in Ireland, it no longer really existed? Ireland had moved on, but it seemed the Irish pubs of London hadn’t.

I remember stepping through the doors of Conway’s 3, in Edgware, in 2013, and wondering if I’d gone back in time. It was wall-to-wall with dancehall music, vodka mixed with TK lemonade (left on the bar so you could pour your own) and couples waltzing. I remember looking around and feeling sad for the people who were there. Not pity. Sadness. Sad that some of these people would have left home when they didn’t want to. Sad that some never really settled, and needed this piece of home. Sad it wasn’t a true representation of the home that would be there for them if they ever went back.

Not all Irish pubs are littered with lonely souls. For many, an Irish pub in a place far from home provides a link to their heritage, their community. It’s a place to play music, get a good “feed”, meet friends, and holler at the GAA with your fellow county supporters.

But my curiosity has always been with the pubs that had an air of longing. And, as, one by one they closed down, I wondered what kind of social history was dying with them.

First Conway’s 3 closed. Then O’Reilly’s. The Quays in Holloway and The Kingdom in Kilburn went too. Just like The Thatch on Holloway Road and Cricklewood’s famous Galtymore before them, they shut down and resurfaced as shiny new apartments or some other high street establishment. When I passed them in their reincarnated versions, I wondered what had happened to the people who used to go there every weekend.

It was a question I posed to Pat Logue, the landlord of the Sheephaven Bay in Mornington Crescent, Camden, one Thursday evening.

The Sheephaven is probably what you think of when you think of an Irish pub: well-worn floorboards line up with the wood-panelled walls; from the ceiling, jerseys and county flags hang, interspersed with bodhráns, banners and other bric-a-brac; the walls are adorned with Guinness paraphernalia, alongside pictures of county players, road signs, and newspaper articles deemed worthy of framing. This tapestry of the Sheephaven’s history has built up organically over time.

Logue, a heavy-set man from Co Donegal, wears a tea towel slung over his shoulder and rests his arms on the bar when he talks. He knows the name of each person who walks through the door and their back story. He considers his answers carefully when asked a question, and you can see him thinking back and mining his brain for information from the archives.

As I sat at his bar, a man approached to ask what I was doing. I told him I was researching Irish pubs, and the connection people had with them.

Why do you come here? I asked.

“We’re plastic Paddies – our parents were Irish. All the other good Irish pubs are gone. This is the only one still left round here, so this is where we come. And Pat looks after us.”

Around north London, many Irish publicans have closed their doors. Some were sitting on land worth a small fortune and, rather than hand over the business of late nights and tight budgets to their children, they sold to developers and retired comfortably.

For other pubs, the story behind their swansong was not so fortuitous. Many have been priced out of the area. Over the years, Irish pubs have lost their role as the centre of the community. At one time, the typical London Irish pub was a watering hole, a job centre, a bank of sorts where pay cheques could be cashed, a GAA club, a dancehall and a diner rolled into one. If you were stuck for a job, a quick jaunt up to the local and the price of a pint would usually result in a bit of work on a site the next day.

“The culture was different,” says Logue. “Back in your parents’ day, drink was the thing – it was the only way of socialising. Nowadays, people don’t need to go to the pub to meet up.”

Economically, times have moved on too. The young Irish coming to London these days are a mix of professionals and trade workers. They don’t need to rely as much on word of mouth to find employment. Salaries are paid into bank accounts. Dinners are eaten in pop-up restaurants and gastro pubs. For many Irish in London, the pub is no longer their social switchboard.

But Logue doesn’t believe Irish pubs have had their day. Those moving with the times are flourishing. Whelan’s, a chain with bars across London, offer great food and lively atmosphere just as much as they do for the familiar dose of home.

Craft beers are becoming as familiar as a pint of stout. Logue  mentioned craft beers as the next venture for the Sheephaven. “It’s where the market is going, and it’s what people want.”

At the popular Howl at The Moon in Hoxton in the East End, owner Seamus Travers, originally from Co Cork, is determined to deliver modern Irish hospitality, offering a rotating selection of Irish craft beers and a contemporary take on Irish pub food. Mc&Sons in Southwark, south London, has a similar set-up.

Logue and Travers both believe Irish hospitality has a place in the London pub scene. The pubs that don’t move with the times will die out, but those that modernise, while maintaining their authenticity and keeping hospitality at their forefront, will always have a place.

I got a message from Travers after I left the Howl, to say he had something for me, and that he’d leave it at the pub. The next time I went back to Howl at The Moon, there was box of Barry’s tea behind the bar for me. It doesn’t get more hospitable – or Irish – than that.

So is there a future for Irish pubs in London?

“Absolutely,” Travers says. “Even more so now than ever before, because the one thing that hasn’t changed in London, regardless of year or era, is that it’s a very easy place to be lonely. And people don’t want to be lonely.”

Share your DIY projects: What home improvements have you done in lockdown?
5

Róisín Ingle: My sister Rachael dropped me at that London clinic in a black taxi
Real news has value SUBSCRIBE