‘Malawi is facing a period of severe food shortages’

Laura Quirke, an Irish teacher in Malawi, shares her experience of this week’s floods 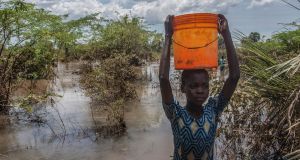 A girl fetches water from a river created by flood water in the Nsanje district of southern Malawi. Photograph: Amos Gumulira/AFP/Getty Images

The city of Blantyre is in an elevated position and thankfully escaped the worst effects of the storm. However, localised flooding and many fallen trees and electricity poles caused disruption and delays with some roads being impassable.

The power supply has been severely affected due to two of the power stations flooding, leading to frequent power cuts and surges in some areas of the city.

Many are now sheltering in makeshift camps in churches and warehouses with no access to clean water, toilets or medical assistance

In the immediate days after the worst of the storm, locals, expats and many small independent charities and organisations began to collect donations of food, blankets, water and clothes to get to those affected. The Malawi Red Cross, Malawi defence force and police, as well as international aid agencies, have also been working to get aid to those that have been displaced. This has been difficult in more rural areas as bridges have been washed away or submerged and some roads are impassable.

Blantyre is situated above the Shire Valley. Water levels in the Shire river were already higher than usual after a particularly wet rainy season. When the storm came, the river burst its banks causing extensive damage to homes and crops.

Local papers here report that 14 of the 28 districts have been affected by the floods, and about 22,000 households. There are 86 reported dead so far with many missing. Many were injured or killed when their houses collapsed on them or while trying to cross flood waters. Thousands of acres of crops across southern and central Malawi have been destroyed and livestock killed.

Many are now sheltering in makeshift camps in churches and warehouses with no access to clean water, toilets or medical assistance. The districts near us that have been badly affected are Blantyre district, Chikwawa, Phalombe, Thylo, Mulanje and Nsanje.

In the long term, and with so many crops destroyed and the growing season long finished, Malawi is facing into a period of severe food shortages. Maize is the main crop here and is ground into flour to make a type of porridge called nsima which is the staple food.

Much of the maize has been washed away, and the maize that is left has been damaged by strong winds and heavy rain. Zimbabwe, Zambia and Mozambique are suffering from the same, and this will limit the trade of maize between the countries, driving up the price.

Short term, it will take significant investment to repair damaged infrastructure. It is also crucial that those who have been displaced get access to safe, secure shelter with clean water and sanitation to prevent the spread of water borne diseases and malaria.