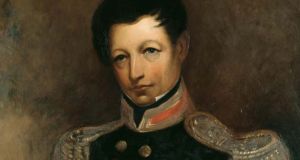 William Hobson survived three bouts of yellow fever and twice being captured by pirates to become the first governor of New Zealand. Despite his ability to endure so many brushes with death, it was arguably the strain of governing a new colony that precipitated a fatal stroke in 1842.

Hobson’s life was devoted to serving the Royal Navy and British imperial administration.

Born into middling circumstances, Hobson was the son of a Waterford barrister. In 1803, aged 21, he entered the Royal Navy as a “gentleman volunteer”. The Napoleonic Wars offered variety and excitement as he pursued the French in the North Sea and the West Indies, eventually being promoted to lieutenant.

In 1818, Hobson found the next chapter of his career in the West Indies, where he pursued pirates and slave ships. His unscrupulous targets occasionally bested him, and he was twice captured by pirates off the coast of Cuba.

The Caribbean climate also proved itself an adversary, and Hobson contracted yellow fever three times, one of the most dangerous infectious diseases of the age.

Hobson saw new opportunities in the embryonic British colonies in the South Pacific, and in 1834 was dispatched to Australian waters. He was instrumental in the establishment of Port Phillip in 1836, an important early settlement that would grow into the present-day of Melbourne.

Whether Hobson was the person best suited to the role, or simply the one nearest at hand, in 1837 he was dispatched to New Zealand, charged with reporting on the war with Maori.

As lieutenant-governor from 1840, Hobson was implicated in the transfer of land from Maori to the profit of settlers, and as the person with ultimate responsibility for negotiations, he also failed to provide Maori chiefs with adequate translations or explanations of the Treaty of Waitangi, the founding document of New Zealand.

In the face of opposition from New Zealand Company settlers at Port Nicholson (now Wellington), and an attempted French takeover of the South Island, Hobson proclaimed British sovereignty over New Zealand in May 1840. The islands became a crown colony in 1841, ushering in the era of European settlement and the destruction of the traditional Maori way of life.

Despite the outward signs of British authority - the “wooden palace” or Government House, vice-regal dinners, flags - New Zealand was the farthest of the colonies. Despatches took nine months to reach Hobson, he was unpopular with the settler population and with the press, and while he was painfully aware of the minority status of the white settlers, his attempts to appease Maori were clumsy and miscalculated.

For example, he appointed a missionary, George Clarke, as “protector of the aborigines”, but Clarke was also required to purchase land from Maori on terms that would only ever profit colonial government and white settlers.

On her husband’s death in 1842, Eliza Hobson quickly realised that she could not depend on British government support for her family of five. A merchant’s daughter and shrewd property investor, she left the fledgling colony in 1843 and returned permanently to Plymouth in England. On her departure, she was presented with an illustrated album that was specially reprinted for the 150th anniversary of the colony’s foundation.

Hobson’s life encapsulates the roles of the Royal Navy and British imperial administration in providing employment opportunities for countless Irish men in the 18th and 19th centuries. From low-ranking cabin boys to the most senior positions, Irish people joined up for many reasons; some sought adventure, and others needed stable employment.

Those, like Hobson, who were committed to the idea of empire, serve as a reminder that Irish people were implicated in British imperial enterprises across the globe.

This Extraordinary Emigrants article was written by Dr Angela Byrne, Department of Foreign Affairs and Trade Historian-in-Residence at EPIC The Irish Emigration Museum in Dublin’s Docklands. Learn more about Irish mariners at the exhibition, ‘Across the Waves: The Seafaring Irish’ at EPIC until April 12th. epicchq.com

Steal a pig in Tipperary in 1841? You could be shipped off to Australia
5