Welcome to my place... San Francisco 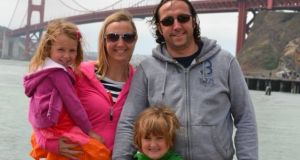 Sylvia McLaughlin works in the Irish Consulate in San Francisco. Here she is at the Golden Gate Bridge with her husband, Gary Foley, and their children, Aoibhe and Aaron

Sylvia McLaughlin, originally from Carndonagh, Co Donegal, has been working in the Irish Consulate in San Francisco, which services the US west coast, for 16 years. Her husband, Gary Foley, is from Lifford in Co Donegal. They have two children, Aaron and Aoibhe

Where the first place is you bring people to when they visit San Francisco?

Bike across the Golden Gate Bridge and cycle down to Sausalito. Have lunch overlooking the bay and jump on a ferry, which will take you back to San Francisco. Or, if you are very brave (or rent an electric bike), you could cycle back up the steep hill from Sausalito towards the city and back over the bridge. I also love to grab an Irish coffee at the Buena Vista cafe (who claim to have invented the Irish coffee). San Francisco can be surprisingly chilly even in the summer months. Often there is a layer of fog around the Golden Gate Bridge. Known as Karl, the fog even has its own Twitter handle @KarlTheFog. It can be bright and sunny and almost warm by Fisherman’s Wharf, but chilly, windy, and overcast near the bridge. So I highly recommend wearing layers. I also highly recommend the Napa Valley Wine Train.

The top three things to do there, that don’t cost money, are ...

Walk around the city and along the boardwalk piers and make sure to stop at one of my favourite spots, the Ferry Building. Until the 1930s (when the Golden Gate Bridge and the Bay Bridge were constructed), the majority of people arrived in San Francisco by ferry here. The terminal is filled with gourmet restaurants and cool little shops. Drive the hilly “streets of San Francisco” ensuring that you drive down Lombard Street (the most crooked street in the world). Stroll around Golden Gate Park – it’s 20 per cent bigger than New York’s Central Park and with its hills, lakes and meadows an escape from the chaos of downtown San Francisco.

Where do you recommend for a great meal that gives a flavour of San Francisco?

Clam chowder at any of the seafood waterfront restaurants is a great meal in a bustling area followed by a trip to the world-famous Ghirardelli chocolate shop.

Where is the best place to get a sense of San Francisco’s place in history?

San Francisco was originally discovered by the Spanish. When you see the size of the harbour, you will get a sense of how critical the bay was to its growth. Another significant location is Alcatraz. Do the night tour. You get the opportunity to visit certain areas of the prison that are normally off limits.

What should visitors save room in their suitcase for after a visit to San Francisco?

For sports fans: Golden Warriors, San Francisco Giants and San Francisco 49ers souvenirs. Also Ghirardelli chocolate and See’s candy (both made in San Francisco). Wine from the Napa Valley. Watch an episode of The Streets of San Francisco before you go, too. Also Escape from Alcatraz, Mrs Doubtfire and Bullitt, which were all filmed there.