The top stories in Irish Times Abroad this week 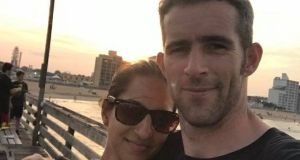 This week our readers reacted strongly to our most-read story in Irish Times Abroad about the Irish in London attending the funeral of man with no mourners. John Lynch, from Ballylongford in Co Kerry, died last month. He often wore his Kerry jersey in carehome in west London. More than 130 members of the Irish community attended his funeral service. The story highlighted the issue of isolation among elderly Irish people abroad...

Over in the US there has been a lot happening this week. We asked you to share your views on the clampdown on undocumented immigrants in the country, and the responses varied from “come in legit or stay at home” to “I am very concerned about the clampdown on immigrants, with or without documents. Once these things get started, where do they end?” In a high profile case, Irishman Keith Byrne (37) is expected to be deported from the US on Friday unless a last-ditch plea for leniency comes through. His wife says she has not given up hope. In Atlanta, Georgia, Cormac Lambe, from Dundalk, Co Louth, wrote about the people of Atlanta protesting the Immigration and Customs Enforcement (ICE) raids on undocumented migrants in the city in his article: “Imagine if the Irish were characterised as murderers, rapists and drug dealers by the country’s leader?”

Back in the UK, Boris Johnson, who is expected to become prime minister within the week, is making headlines with his remark about Taoiseach Leo Varadkar: “Why isn’t he called Murphy like all the rest of them?” Charming. Peter Flanagan, a comedian based in London, asks “Could Boris be Britain’s first cute hoor prime minister?” and how he commands fierce loyalty despite his conduct, just like some of our own.

There’s been plenty of debate on the emigrant vote referendum this week but the Government has yet to confirm if the referendum will be held in October or November, or even later. Ministers pointed out in Cabinet that holding the referendum to extend the vote in presidential elections to Irish people living abroad in October would clash with Brexit deadline. One Minister predicted the referendum would not be held until early 2020. We will keep you updated.

Leaving politics to the side, Alan Rownan has written about how golf has bridged the gap between him, living in London, and his father, living in Dublin, and where he plans to be for the British Open this weekend.

Also popular this week is an article from Roy O’Hara, originally from Leitrim, on how agencies in Ireland ignored the experience he had gained in New Zealand: “I didn’t want to go back and have to start from scratch,” he wrote about his decision to stay in Auckland.

Our Extraordinary Emigrants story this week is about musical prodigy Arthur Sullivan, whose parents were both Irish, and the curse of popularity.