Growing expectation Keith Byrne will be deported from US on Friday 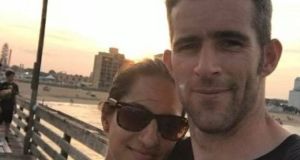 Keith Byrnes wife Keren said: “He is raising proud Americans who will know what it is like to work hard for what they want and what they need.”

US lawyers representing Irishman Keith Byrne have made a last-ditch plea for leniency to US authorities amid growing expectations he will be deported on Friday.

In legal filings lodged this week and seen by The Irish Times, Thomas Griffin, the Philadelphia-based lawyer representing Mr Byrne, requests authorities stop the imminent removal of the 37 year-old from Cork and allow him make his case before an immigration judge.

Noting that Mr Byrne has had no dealings with police since arriving from Ireland on the Visa Waiver Program in 2007, he said that Mr Byrne “has never been a danger to the community and he is not a national security risk.”

Mr Byrne overstayed his visa by a number of months. He later tried to regularise his position in the US by paying a financial contribution for his failure to abide by the visa programme. He told his lawyer that he had a conviction in Ireland for possession of cannabis and that was included in his application for citizenship.

Meanwhile, noting the support in the Philadelphia community for Mr Byrne, as well as the extensive media coverage internationally, Mr Griffin said Mr Byrne, who runs a painting business, “has consistently abided by the law, and has regularly paid business and personal taxes,” he writes.

He also notes Mr Byrne’s family will likely lose their house in the event of deportation as the mortgage is more than half of Keren Byrne’s nursing salary.

Also included in the filing is a statement by Ms Byrne. “Even though we knew this day might come nothing could have prepared me and us for what this feeling is.”

She says the family has been “judicially and very methodically trying to ensure Keith’s permanent and legal residence in the United States...we have been nothing but honest during all proceedings and applications for citizenship”.

Ms Byrne said her husband “did not come here to ‘pull on the system’, he is working hard every day and contributing to society and most importantly to our home and our children.

“He is raising proud Americans who will know what it is like to work hard for what they want and what they need.”

The intervention by Mr Byrne’s legal team comes as legal officials close to the case told The Irish Times that Mr Byrne’s team has effectively exhausted all legal avenues, and that he faces the prospect of incarceration in a tougher facility if he does not comply with orders and sign documents paving the way for his deportation on Friday.