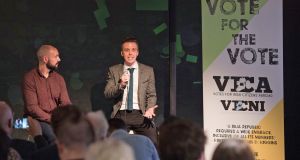 Alan Flanagan (L) and Ben Kelly (R) speaking at the launch of the Vica campaign ahead of the emigration vote referendum. Photograph: Dave Meehan/ The Irish Times

This week I got to meet a group of enthusiastic Irish people who had come together to kick off their campaign for Yes in the emigrant vote referendum, which is now expected to take place this November. The group, who live in Northern Ireland and overseas, and some who had returned from living abroad after many years, spoke passionately about their desire for the right to vote to be extended to all Irish citizens in presidential elections.

The question the referendum will ask has already provoked a lot of debate. Irish Times Abroad received an exceptional number of replies when we asked for your views. People were divided in the replies, and concerns were raised. From those who in favour of extending the vote: “Our hearts still lie with the mother country and we should be permitted to have a say in who gets to be elected,” to those against: “I do not believe that the 3.6 million Irish abroad should have the right to vote in the referendum or any other vote in Ireland.” You can read some of the responses here, and we will keep you up to date on all the latest developments on https://www.irishtimes.com/life-and-style/abroad.

Our top story today is from Vikki Barry Brown, who wrote an article about her own experience of applying for an Irish passport for the first time, and the research she has done on other “Brexit Irish” in England. “Getting an Irish passport was partly about rebelling a little bit against Brexit,” one of her participants told her.

Also popular this week was an article from Louise Lawless on a question many of us have struggled to answer at some time: Is your “home” where you grew up or where you live now?

One of our top read articles was the Extraordinary Emigrants story from Nathan Mannion, about the Irishman who rose to the very top of the Spanish royal court.

And for something completely different, Seamus McManus, a doctor originally from Dublin, wrote a touching article from Oslo about his experience of his first time assisting in a caesarean section: It’s a summer’s day in Oslo, and my first caesarean section.