Emigrant vote: Campaigners for Yes meet with TDs and Senators ahead of referendum 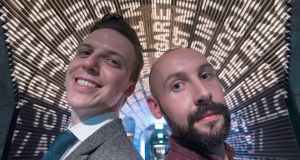 The rain didn’t dampen the spirits of the enthusiastic group of people gathered in Dublin this week to kick off a campaign to urge people to vote Yes to allow Irish citizens living abroad voting rights in presidential elections.

The Government intends to extend the right to vote to all Irish citizens outside the State, including Northern Ireland, potentially through a postal ballot and online registration.

Representatives from Votes for Irish Citizens Abroad (Vica), a London based group, made a presentation to TDs and Senators from all the political parties on Wednesday.

The group said Minister for the Diaspora Ciarán Cannon had informed them the referendum would likely go ahead November, rather than October as had been previously suggested, after the Brexit deadline.

The wording of the question to be asked of voters is expected to be released in the next week.

Vica spokesman Alan Flanagan, who is originally from Co Longford but has lived in London for the last seven years and Toronto the previous two, told the crowd that the president of Ireland represented all Irish people around the world.

“The president represents the nation, and the very notion of Irishness,” he said.

Mr Flanagan said Irish citizens living outside the State were engaged and connected with what was happening in Ireland.

The Department of Housing and Local Government estimates that the number of people eligible to vote outside of the Republic could be up to 3.6 million.

However, this is highly unlikely as in countries where there are provisions for voting from abroad, the number of people who cast their ballot from overseas is relatively small.

Currently under Irish electoral law, Irish citizens are only allowed to vote for 18 months after leaving the country, provided they plan to return to Ireland within that timeframe. Those who are eligible must travel back to their home constituency to cast their ballot. Citizens living in Northern Ireland, about 1.8 million, are also excluded.

Vica member Ben Kelly (29), who is from Co Derry and has lived in London for almost a decade, told The Irish Times that the meeting in Leinster House this week had been “extremely positive”.

He said the vote meant a “huge deal” to him personally, as he is an Irish citizen but has never been able to vote.

“In recent years I’ve never felt more of a connection with our country because we do have a great president in Michael D Higgins. I’m gay, and I had to come to Ireland to get married to my partner because I couldn’t get married in Derry. I felt embraced by Ireland.

“Also, as Britain is disintegrating before my eyes, I’ve never been more proud to be Irish.”

Fianna Fáil Senator Mark Daly also spoke at the launch, saying the issue “goes back to simple fundamental right” to vote and legislation needed to change so all Irish citizens could be included.

It was also mentioned during the event that thousands of emigrants who travelled back to Ireland during the #hometovote movement for the referendums on marriage equality and the Eighth Amendment to cast their ballot.

The decision to hold a referendum builds on the findings of the Convention on the Constitution in 2013, which recommended that the Constitution be amended to provide for citizens resident outside the State, including Northern Ireland, to have the right to vote in presidential elections.

Meet gentle George the chicken dog and his hentourage
5