Opposition concerned over lack of detail on voting rights referendum 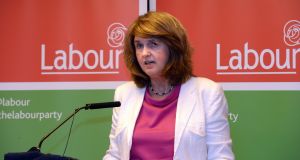 Labour TD Joan Burton: ‘I don’t think there has been any really serious debate on this, and no white paper on the extent of the proposal.’ Photograph: Cyril Byrne/The Irish Times

Fianna Fáil and Sinn Féin have called on the Government to publish its proposals for a future referendum to extend voting rights in presidential elections to Irish citizens who are abroad.

The Labour Party has also said that it has “huge concerns” about the plans.

The Government intends to extend the franchise to all Irish citizens abroad, potentially through a postal ballot. The referendum is expected to take place in October or early November.

A spokesman for Fianna Fáil said the party supported the idea in principle, but was concerned and frustrated that the Government had not yet provided full details about the plan.

Labour TD Joan Burton said there had not been enough debate on the topic.

“I have huge concerns around the details of the proposals. I don’t think there has been any really serious debate on this, and no white paper on the extent of the proposal,” she said.

It is vital that the proposed wording and supporting legislation is published before the end of the Dáil term. The autumn will be too late

“Will it be many millions of extra voters and how will the vote be organised? Will there be physical polling stations in embassies or online voting?”

“Sinn Féin supports the holding of a referendum. However, it is vital that the proposed wording and supporting legislation is published before the end of the Dáil term. The autumn will be too late. People need to know what they are voting on.”

Sources in Fine Gael have admitted to being anxious about the potential failure of the referendum, citing concerns about the lack of debate so far, and concerns around ensuring the security of the ballot.

The Department of Housing last month circulated the general scheme of the 39th Amendment of the Constitution (Extension of the Franchise at Presidential Elections) Bill 2019 to the Oireachtas foreign affairs committee.

This will need to be approved by Cabinet before the summer break if the referendum is to be held in October, it is understood.

The legislation reveals that the Government plans to extend the length of presidential elections to 90 days from the current 60 days.

The department estimates that the number of people eligible to vote outside of the Republic could be up to 3.6 million.

The decision to hold a referendum builds on the findings of the convention on the Constitution in 2013 which recommended that the Constitution be amended to provide for citizens resident outside the State, including Northern Ireland, to have the right to vote at presidential elections.