Why humans need mercy more than justice to survive 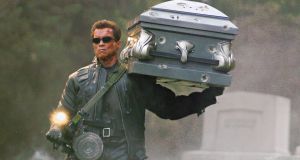 Arnold Schwarzenegger in Terminator 3 Rise of the Machines. ‘The prospect of being at the mercy of a future super-intelligence seems entirely realistic,’ says Malcolm Bull. Photograph: Reuters/Warner Bros

Is it better to be just or merciful? This question has troubled politicians and preachers down the ages but in recent times the hammer of justice has been banging particularly loudly.

By “recent”, I mean roughly since the Enlightenment when, as Malcolm Bull highlights in his new book On Mercy (Princeton), the Aristotelian-Christian virtue of forgiveness started to drift out of fashion within political theory.

Luminaries from David Hume to John Rawls have elevated the concept of reciprocity above arbitrary goodwill. Moral duty, according to the now dominant way of thinking, is repaying what’s owed – being fair but not gullible, constantly adjusting the extent of your benevolence under careful moral accounting.

Has the pendulum swung too far? Without justice there would be no VE Day, no courts of law, no marriage equality referendum. But without mercy, there would be no Marshall Plan, no rehabilitation, no Northern Ireland peace process.

Bull goes further, suggesting mercy is necessary for justice to exist. For communication and sociability – basic foundations of a just society – to be possible, those in positions in power must “minimise scepticism and harm. And given that communication and sociability are possible, then it is fair to assume that this is what is happening most of the time”.

While Bell’s book is charmingly erudite, as you’d expect from a professor of art and the history of ideas at the University of Oxford, it is also an important work of political philosophy – a much-needed response to those who endlessly cry: “But it’s not fair!”

“It is up to the proponents of justice to show that something other than mercy is needed to explain our day-to-day survival,” says Bell, today’s Unthinkable guest.

What is more essential to human survival, mercy or justice?

Malcolm Bull: “It is possible to live without justice, we do it all the time. But without mercy we are dead, because no one can possibly defend themselves successfully against every threat at all times.

“It is the fact that other people do not exercise their power to harm us to the full that allows us to survive from one day to the next. It provides us with the security needed to think about whether our social arrangements are just or not.”

If mercy is paramount, does that mean we should reject accounts of justice that fail to accommodate it?

“As Aristotle was the first to recognise, it is actually quite difficult for justice to function successfully without recourse to a supplementary principle that softens the way its rules are applied. When that’s the case, justice gradually reshapes itself to fit the contours of mercy in any case. That’s one reason that penal codes generally become less harsh over time.

“If we accept that justice is just a set of conventions or rules that allow specific problems to be resolved in a particular time and place, then we won’t be tempted to think that we’ve discovered the blueprint for an ideal society. Any system of justice has to accept its limitations.

“Its internal limitations are often revealed in the day-to-day exercise of the law, but people can rarely see beyond the boundaries of the system itself. It took many centuries for women for attain full legal rights, and even today our conception of justice barely extends beyond the nation state.

What limits should be put on mercy?

“If the chief problem with justice is that cannot see beyond its own borders, the beauty of mercy is that there is no boundary it cannot cross, no rule that cannot be applied more mercifully than it was in the past. But that, as critics of mercy have always pointed out, is also a danger, because mercy potentially unravels the very fabric of society and takes us back toward anarchy.

“That is actually a perfectly fair description of the way mercy works, but it should not be as alarming as it’s made to sound. For a start, we underestimate the degree to which we live in a state of anarchy already. And the fabric of the world is not just undone by mercy it is made by it.

“Even supposing that we can be said to govern ourselves by mutual consent within the nation state, the so-called global order is just a temporary balance of power in which every non-nuclear state is at the mercy of the nuclear powers.

“Our survival is already a function of the interplay of power and mercy, and no one is looking to put a limit to mercy in this context. If you’re the one who’s vulnerable, limits to mercy look far less attractive.

“However, it is important to remember that mercy is not an ideal theory, it generates no account of how things ought to be, it just offers a guide to the next move. And to count as merciful, an action only has to be more merciful than an existing norm.”

Should mercy be extended to future humans, or other species, and if so on what grounds?

“Mercy doesn’t have grounds in the way that justice might be said to do. That’s why justice is so limited, because there aren’t grounds for everything that happens in the world.

“Mercy functions more pragmatically. It’s what makes the difference between war and peace, because without mercy no one has any reason to stop fighting.

“Mercy creates the possibility of politics rather than war, and if we want to have a political relation to other inhabitants of the planet then mercy is required.

“For most of history the human species has been in a state of constant war not just with itself but with other species and its own future members. We’ve only just noticed this because until recently our weapons were so feeble that we had little sense of our own power. With this recognition comes the possibility that the defenceless members of future generations and other species may acquire virtual representatives who are willing to fight for mercy from within the present generation of the human species.”

You suggest that we need to programme super-intelligent computers to be merciful. Why so?

“The idea that political theory is exclusively about human relationships is a modern one.

“For most people in most times and places politics was conceived as involving supernatural, natural and human forces. Whether it is Amerindian cosmology, or the Stoics’ idea of the cosmic city, or medieval Catholic theology, we are operating with a far richer ontology than the reductive vision of politics as the product of the decisions of rational equals.

“We are now generating our own mythologies in which the prospect of being at the mercy of a future super-intelligence seems entirely realistic. This enables us to think about politics as it actually is, namely as a set of vastly unequal relationships in which the people doing the thinking are not necessarily also the most powerful agents. That is quite salutary.”

Question: Is there a way of ensuring super-intelligent robots are merciful towards us in the future?

Greg Heffley (from Diary of a Wimpy Kid) replies: “I’ve actually been PREPARING for when the robots take over by sucking up to the appliances in my house… [telling them] You’re looking good today. Did you just get cleaned?”