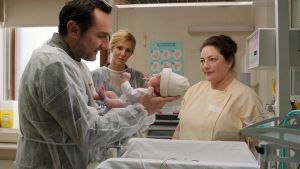 Writer-director Jeanne Herry’s adoption drama stars Sandrine Kiberlain, Gilles Lellouche, Élodie Bouchez and various Francophone reliables as the adults that come into contact with Theo, a newborn baby, born to an unready 21-year-old university student (Leila Muse). Her experiences are shaped by France’s adoption procedure known as “l’accouchement sous X” or “l’accouchement sous le secret”, a system that allows mothers to give away their babies anonymously.

Theo and his mother are assisted by Jean (Lellouche), Theo’s foster parent for the three months while he awaits adoption, and case workers Karine (Kiberlain), Lydie (Cote) and Mathilde (Mollet). Alice (Bouchez), looks like the best candidate to provide Theo with a loving home and she has been waiting, as we learn, for a long time.

In common with Xavier Legrand’s nerve-wrecking 2017 drama, Custody (Jusqu’à la garde), In Safe Hands (or Pupille in French, the name for an orphan who is a minor) attempts to marry the procedural to the generic. Almost inevitably, it’s not as successful as Legrand’s cross-pollination of thriller, legal reckoning, and domestic abuse expose.

At its best, Herry’s second feature – the winner of seven Césars – maintains a focus on the system that is worthy of a Frederick Wiseman documentary. Scenes depicting the bureaucratic settings, meetings, feedback, reports, and heated arguments that go on behind the adoption process make for absorbing details. The film is rather less successful when it dabbles with a half-baked romantic subplot and soapy back stories.

Cinematographer Sofian El Fani trades in studied close-ups; even the central infant (played by 15 different babies and a doll) gets reaction shots.

The choral structure, a world away from Herry’s 2015 stalker melodrama Elle L’Adore, confirms the writer-director (the daughter of actor Miou-Miou and singer Julien Clerc) as a versatile talent.

Johnny Logan: ‘Dickie Rock is a legend in his own head... He lives in a fantasy world’
9

Nealo: ‘I’m not important... but I’m important to my son’
Real news has value SUBSCRIBE