Should children be taught to be patriotic?

Unthinkable: There is merit in a virtuous patriotism but it can't be instilled through trickery or threats, says Randall Curren 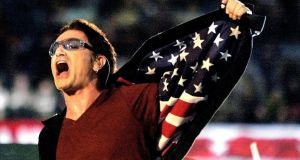 ‘There is a massive patriotic messaging around sports events’: U2 lead singer Bono shows the stars and stripes of the US flag during the 2002 Super Bowl halftime show. Win Mcnamee/Reuters

Western Europeans tend to look upon American displays of patriotism with a mix of amusement and horror but we have our own flag-waving neuroses here – what psychologists call “pathologies of patriotism”.

Witness for example the visceral reaction some sports fans have when international players fail to mouth the words of the national anthem. Or listen to some of the arguments which have been advanced for making Irish history obligatory for teenagers in secondary school.

One current of thought is that if the young don’t familiarise themselves with the blood sacrifice of their ancestors they will fail to grow up to be good citizens. Yet the “wellbeing” programme which is being rolled out in Irish schools includes exactly the sort of civic and social education that has been linked to active citizenship.

As US educationalist Randall Curren points out, there is “no motivational science” behind the idea that learning patriotic songs or engaging in nationalistic customs produces virtuous young adults. “There are certainly things we all need to know about the merits of our system of government; there is honest history, and honest study of government.” But “it’s all speculation that patriotism is the magical or special glue that would hold everything together”.

Curren, who has co-authored with Charles Dorn a book on the subject, Patriotic Education in a Global Age, says a different type of debate is called for in schools and colleges. Rather than asking whether patriotism is good or bad, “We are asking a different question: Could there be a virtuous form of patriotism?”

His experience as a parent in New York has made him more concerned about the issue. In the US, “there is a massive patriotic messaging around sports events” and, he says, overt displays of loyalty to the flag escalated significantly in schools after the 9/11 terrorist attacks.

“My profound worry about it was it was part of stampeding people towards an unjustified war.

“I think a proper, virtuous kind of patriotism would be much more clear-eyed in perceiving the dangers and what’s the right way forward,” says Curren, today’s Unthinkable guest.

What is virtuous patriotism?

Randall Curren: “We owe people we are interacting with – wherever they are in the world – fair co-operation. That is a fundamental civic duty and anything that could constitute virtuous patriotism would have to fit into that larger scheme . . . Being properly responsive to the value of a country is going to have to be sensitive to what actually helps us live well together and what does not.

“Some people would say that’s just not patriotism; it’s not patriotism if you don’t favour your compatriots above everyone else in the world. And I would say, right now, we don’t know how much we could ethically favour our own country’s interests. We can’t know that until we know what are the fair terms of global co-operation that we should accept.”

But is it legitimate to prioritise ‘your own’ on grounds of social cohesion?

“We have some ethical scope to favour members of our own family – we have made certain commitments that give us responsibilities in our own families – but no one would say that precludes us from being a good citizen of our town, or country.

“By parity of reasoning, we can say something similar in a country, that we can make special commitments within that country and it’s right for us to honour those commitments; it’s just hard to know where exactly the boundary is.

“Suppose there is an accident at sea: there was a costume party on an ocean liner where everyone is dressed in their nationally-identifiable party wear. If you were looking at people going overboard saying, ‘These folks over here are Irish, these folks are South Africans, or Russians or Americans, I should save all the Irish first’, I think a fair reaction to that is: that looks like racism. I don’t think a virtuous kind of patriotism could work that way.

“It has to be more a matter of making commitments within the scheme of co-operation for your own country but from a point of view of basic morality or basic virtue, under which every life is going to be equal.”

There are strong advocates for flag-raising and other displays of patriotism in American schools. What’s the evidence that it motivates people to do good?

“There is a set of three basic psychological needs people have: for autonomy, to be positively related to other people, and to feel competent and to feel yourself growing in your abilities and your competency. We have hundreds, thousands of studies now, across 40 countries showing that these three needs are central to human action and motivation

“You give people a positive social world; you model for them treating other people respectfully; you treat them respectfully; you respect their autonomy; you help them grow in their competence. The satisfaction of those needs will be favourable to them accepting the values you are presenting.

“If you’re frustrating those needs while trying to dictate what they should believe and value they will never fully integrate those values into their own identity.

“That’s how it works. It’s not through trickery, or threats. If people are doing things because the have internalised guilt or fear, or because they feel pressured, what you get from that is not virtue.”

Galway Film Fleadh online: The highlights of what to watch from wherever you are
2

What did Jesus really look like, as a Jew in 1st-century Judaea?
3

Charlie Daniels, country star who sang The Devil Went Down to Georgia, dies at 83
9 Welcome to Dublin, unless you're black
10