The greatest Irish thinker you’ve never read? It could be this man 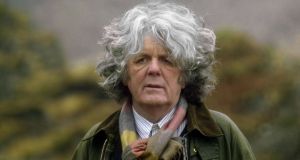 The late John Moriarty. Andy O’Mahoney on an RTÉ radio programme in 1985 introduced him with the words: ‘My guest tonight is one of the most remarkable people that I’ve ever met in my entire life.’ Photograph: Don MacMonagle

Who hasn’t felt the urge to drop out of society – to turn off the mobile phone, leave the rat race and retreat to the wilds?

Diogenes was perhaps the first role model. He lived seminaked in a barrel, threw away his only piece of crockery when he saw a boy drinking with his cupped hands, and was so unperturbed by status that he told Alexander the Great to get out of his sunlight when the dignitary paid him a visit.

It’s easy to scoff at such “backwardness” but scorning the ascetic, the dropout or the spiritual adventurer is perhaps a self-defence mechanism among those who lack the courage to be unconventional.

John Moriarty was not so afraid. The Kerry-born writer was marked out from an early age for his sharp mind. He went from UCD to the UK and then to Canada, where he taught English literature at the University of Manitoba.

Then, as the poet Paul Durcan recalled, “Moriarty threw up the academic life and vanished… no one knew where he was”. In 1985, he reappeared on an RTÉ radio programme, introduced by Andy O’Mahony with the words: “My guest tonight is one of the most remarkable people that I’ve ever met in my entire life.”

It turned out Moriarty had been busy gardening – and doing some writing in between. Eager to live a more authentic life, one closer to nature and more in spirit with what he called “the divine”, he had moved to a Carmelite monastery in Oxford and then to Connemara. He would later relocate to Co Kerry where he sought to establish a Christian monastic “hedge school”, Slí na Firinne.

Moriarty died in June 2007, aged 69, leaving behind a series of books, lectures and essays. Writing the previous year, Durcan forecast that over the next two decades Trinity College Dublin would set up “the new John Moriarty Chair of Wisdom Literature, endowed by the Bank of Ireland” and “movie-makers will vie for the rights to make a film of his life”.

It hasn’t quite worked out like that but there are those still carrying the flame for him. The comedian Tommy Tiernan has cited Moriarty as an influence and captured a flavour of the Kerryman’s distinctive outlook while visiting his home with a film crew in 2002.

There are others trying to bring Moriarty to a new audience, prominent among them Michael W Higgins. You read it right – not the President of Ireland but his near-namesake, the professor of Catholic thought at Sacred Heart University, Connecticut, who runs an institute in the Kerryman’s name in Dingle under the auspices of his US employers.

The author of several award-winning books, Higgins admits Moriarty can be difficult to decode, describing him as “an epic visionary of Creation’s ever-fecund unfolding”. But to aid that task he has produced, with Sean Aherne – a friend of the late philosopher, a new book, Introducing John Moriarty: In His Own Words (Lilliput Press).

Moriarty’s concern for the ecology gives his writing added currency. He saw the damage being done to Earth as evidence that humanity had taken a wrong turn, as Higgins – this week’s Unthinkable guest – explains.

Moriarty’s thinking is hard to characterise. Is it fair to call it therapeutic philosophising rather than scientific or logical reasoning?

Michael W Higgins: “I think that it is best to classify him as a visionary thinker – more interested in sapientia than scientia.

“Although he had done graduate-level work in formal studies of philosophy, he opted for Welsh mythology over Cartesian systematisation; he elected the priority of imagination over deductive reasoning.”

If you had to summarise his philosophy in a sentence what would it be?

“I would say he was an eco-poet keen on drawing on the vast sources of primitive mythologies, ancient narratives, and contemporary insights in science and spirituality to help us redirect humanity toward an evolutionary understanding that takes seriously its obligations to the planet.”

What is “the divine” exactly in Moriarty’s scheme?

“Although Moriarty had a religiously synergistic mind – open to diverse traditions and theological structures of understanding – he remained in some cardinal ways deeply orthodox in his mysticism, Christocentric, but hostile to dogmatism, poverty of imagination, and institutional priorities.”

Moriarty had a firm belief in the afterlife. Where did this faith come from? His Catholicism? His Buddhism? Or did it spring from his closeness to nature; his everyday witnessing of the cycle of life?

“His belief in the Resurrection is consistent with his belief in an ever-unfolding and comprehensive cosmic Christ. Other faiths supported his conviction around aching into holiness, the search for higher meaning. But in the end, as you say, the cycles of nature were determinative, immediate, and the ever persistent object of his love and reverence – although he was no naïve romantic.”

Why do you think he has been relatively neglected in the Irish canon?

“John Moriarty’s utterly personal, autobiographical and poetic way of philosophising is so far outside the norm – acceptance in the canon is a long-term undertaking. He is a visionary as opposed to systematic thinker and writer – more in the way of a Christopher Smart, William Blake and WB Yeats – than a Roger Scruton, Charles Taylor or Elizabeth Anscombe. ”

John Moriarty – in his own words:

On the divine: “If, while I was in the womb, my umbilical cord had been cut, I would have been in trouble, wouldn’t I? Similarly if my connection with the divine is severed, there is essential nourishment I am not getting and whether I acknowledge it or not I am in trouble.”