Want to get a video message from your favourite celebrity? 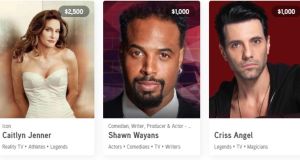 Some of the famous names available on Cameo.

For as long as there’s been pen and paper, autographs have been sought after. Throngs of people gathered outside glitzy film premieres or theatre side doors in the hopes of getting the John Hancock of their idols. It was a given that if you were a celebrity it just came with the job. At some point though, the monetisation of autographs began. Dealers crept amongst the fans trying to get as many signatures as possible so they could flog them at auctions and on eBay. Celebrities became a little more cautious. In fact, Steve Martin, when asked for an autograph, would famously hand out business cards that read: “This certifies that you have had a personal encounter with me and that you found me warm, polite, intelligent and funny.”

In recent years, however, our phones have replaced the autograph book – something that Steven Galanis noticed. “We had the idea that selfies are the new autograph, right, so when you see someone famous, you want to take a picture with them. You don’t pull a Sharpie out any more.” Galanis is the chief executive of Cameo – a website that allows users to pay celebrities to make personalised video messages. “My co-founder Martin Blencowe was an NFL agent – American football – and he had this player that was very popular with the fans but wasn’t popular with business endorsements, and any time he would go out to dinner with him, everybody would want to take a selfie with him. But he couldn’t get any brands that would pay to make him a spokesperson, or an endorsement, so we really thought there was this arbitrage opportunity between fame and the ability to monetise and, really, we thought that there was an opportunity to help fans have a more genuine connection with their favourite people, and that’s kind of where the idea for Cameo was born.”

The process is straightforward. You select the celebrity you want; you type out a few words asking them to say happy birthday or merry Christmas to a friend. You pepper the message with some personal details, hit send and your chosen celeb has seven days to record a video on their phone and send it back to you through Cameo. The website is fascinating to browse. From actors to drag queens and from YouTubers to Olympic gold medallists, there are thousands to choose from. The price for a video is determined by the celebrity. It varies wildly. The priciest celeb is Caitlyn Jenner, from whom a personalised message will wing its way to your inbox for a cool $2,500. You can bag Wesley Snipes at $500 or Stormy Daniels at $250 but prices go all the way down – some lesser-known names will even do it for free.

Some friends I mentioned the service to balked at the idea, saying it was full of C- and D-listers. I put that to Galanis. “Look, I mean at the end of the day, one person’s C-lister might be someone else’s favourite person in the whole world, right? Everybody that I know has some random band that they love that maybe isn’t mainstream, but they like that band more than anybody else. Or any sports fan might have one player that, like, maybe they scored a goal in the one game they went to, and they buy that jersey for the rest of their life, like, that becomes their person.”

He also argues there are some celebrities that everyone follows out of curiosity – a Kim Kardashian or LeBron James – but that for every 200 million followers they might have, there’s a smaller number of people who really, really like them. “If you have 20,000 followers, those 20,000 might like you just as much as Kim Kardashian’s top 20,000 followers like her. In some ways, who you buy on Cameo is almost a reflection of how well you know the friend that you’re buying it for. It’s one thing to get everybody Brad Pitt, or George Clooney – but if you know some actor from some random TV show that we watched just as buddies drinking beer together, it shows how well I know you. So from my perspective, we never think about A-list, B-list, C-list, but one thing we’ve learned is that nostalgia is actually a really big seller.”

He’s not wrong there. Cameo is full of celebs who will have you pining for your youth – including Melissa Joan Hart, aka Sabrina the Teenage Witch, and Bob West, the voice of Barney the Dinosaur. Even veteran voice actor Jim Cummings is ready to give you a personalised video in the voice of Winnie the Pooh. For the record, Brad and George are not on Cameo. Yet.

There is a fair share of Irish people on the site too. Ronan Keating, Keith Duffy and Jedward are all on it, although are currently listed as “temporarily unavailable”. Irish wrestlers Session Moth Martina and Jordan Devlin are there, as is Monaghan actor and star of Outlander Caitriona Balfe. Kerry actor Timothy V Murphy of Sons of Anarchy does a lot of his videos as his character from the show. “Yeah, Sons of Anarchy would be big there a couple of years ago,” he says. “I play one of the bad guys on it and they seem to like that character. He’s an Irish arms dealer, and they think that’s cool, to keep doing that in character.”

‘Revenge of the nerds’

Murphy sees Cameo as an extension of the way many actors make a living from the Comic Con circuit. “It’s like revenge of the nerds, really. When I was growing up there was no such thing as superhero movies, they’d be laughed at or scoffed at. People would laugh at, you know, followers of Star Trek dressing up or, you know, Star Wars was another one. Then all of a sudden Stan Lee and the Marvel heroes became huge and you had Comic Cons all over the place. And where Comic Cons were just a bunch of what were considered nerds or weirdos by the general populace, now are becoming the mainstream for the cool people.

“At Comic Cons now you have every movie and every TV show in the world represented. And a lot of the actors very much do stuff like . . . I don’t know, sci-fi or supernatural or dystopian kind of stuff. They’re now making a fortune on these Comic Cons . . . some actors on it I know would take lower than they expected [for their TV roles] but the argument on the TV producers’ side was, you’re guaranteed to make a fortune in these Comic Cons, or conventions . . .”

The personalised video is still a relatively new skill for celebs to hone. Some are quite stiff and read the information you’ve sent them verbatim. The savvier celebrities take the scant bit of information and improvise. I once had John Challis, aka Boycie from Only Fools and Horses, do a video for my dad’s 70th birthday (albeit from a rival site – CelebVM) and he did the whole thing in character.

“Good day to you Bill, Boycie here,” he started. He paused, looked at his watch. “C’mon Marlene! We’re just off to the Nag’s Head for a snifter with Del and the gang so we’ll raise a glass to you! Oh and my tip for the Curragh is this – stay at home and save your money. You know it makes sense!” he cackled.

In Cameo’s early days celebrities took some convincing to join but now, Steven says, it’s all word of mouth. “The biggest one this year was Snoop Dogg. He’s such a global icon and he came on and for $420 . . . so that was just so on-brand. That’s gonna be hard to beat. When Charlie Sheen joined, too, it was like, this is really cool. We get so many amazing people that, last year if you told me they’d be on . . . I’m like, holy s**t, that’s incredible. And now it’s just kind of like, every day, boom, boom, boom, boom, boom. It’s the new autograph.”