Aquarela: Stunning chronicle of nature at its angriest 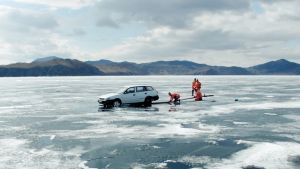 At its most beautiful and serene, Victor Kossakovsky’s Aquarela is the Koyaanisqatsi of water documentaries, an epic tale that takes the viewer around the world to consider the majesty of H2-Whoa. (Sorry.) A rainbow appears across Angel Falls, the world’s tallest waterfall. Blue waves freeze onto an icy shore.

But as the metallic introductory music (composed by Finnish violinist Eicca Toppinen) loudly indicates, this is not a tranquil nature documentary: this is a war zone in which water is the primary antagonist.

Kossakovsky and his team – including co-director of photography Ben Bernhard – often improvised locations and shot without a script in order to simulate the water’s point of view. That makes for nerve-wrecking viewing; at least the Free Solo crew knew what to expect from El Capitan.

In an opening sequence, Russian officials wander around a large expanse of ice at Lake Baikal. They prod at it and burrow with poles. They attempt to look below the vast frozen sheet. Finally, we come to realise that their job is to recover vehicles that are trapped beneath the ice which is melting unseasonably early. We watch a speeding car disappear, leaving rescuers to frantically hack at the spot where they can see one of the vehicle’s occupants just below.

The perils keep coming for those on screen and those behind the camera as the settings shift from Siberia to Greenland to Venezuela. In Greenland, vast chunks of glacier break away into the sea, creating a dazzling and terrifying chain reaction and powerful tsunamis. Out at sea, a couple struggle to keep control of their 100-foot schooner and the seas and skies darken around them. Waves rise and crash, leaving the viewer to marvel that the crew got those shots and somehow got out alive.

In Miami, just before Hurricane Irma hits, dogs huddle together, a horse swims down the street, and birds fish in a flooded graveyard.

Without dialogue or commentary, there are constant reminders of a changing climate. A 400-metre iceberg bubbles and honeycombs underneath as it melts. A dam breaks. Palm trees are tossed and blown around city streets.

Shot in 96-frames-per-second, this is a stunning, thrilling chronicle of nature at its angriest.