What is Houseparty, the app everyone’s talking about – and not in a good way?

In February it was barely known. In March, massive. Now, users want to delete it 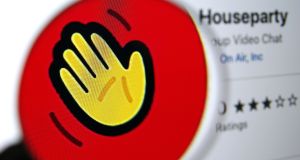 With coronavirus putting much of humanity on lockdown, more and more of us are turning to technology to stave off the worst effects of self-isolation. One of the previously obscure apps that has emerged in the crisis is Houseparty. Average weekly downloads of the app have climbed from 130,000 a week in February to more than two million every seven days in March.

But security concerns have now emerged, with some users complaining the app has led to other accounts – such as Netflix and Spotify – being hacked. Epic, the creator of Houseparty, has hit back, stating it was “investigating indications that the recent hacking rumours were spread by a paid commercial smear campaign”.

Yet with the search term “how do I delete Houseparty” now trending it’s clear at least some Houseparty goers are having second thoughts. Here is everything you need to know.

Houseparty, described by Epic as “a synchronous social platform that lets you connect face-to-face with the people you care about most”, is free to download. You are asked to submit your name, email address, mobile phone number and a user name. The app then asks if you want it to access friends in your mobile contact list or via Facebook or Snapchat. It then automatically links with friends in those lists who have Houseparty accounts.

Until coronavirus, it was most popular with children and teenagers – the same groups that played Epic’s hit video game Fortnite. You can use it to chat with up to seven friends in an online “party” – and to also plays games such as Heads Up.

How do I join?

This is one source of controversy. Once the app is downloaded, users can organise a party in a virtual “room”. However, unless you “lock” this room complete strangers can also join. This has created the phenomenon of Houseparty “bombing”, whereby people leap into Houseparties and display pornographic imagery or expose themselves. They can be locked out by tweaking the privacy settings. But it’s up to you to do this is: it isn’t the default.

Another issue is that your contacts will be sent notifications when you sign up to Houseparty. You don’t have to accept their requests to “friend” you on the app. But you will receive them. If you do become friends they will receive a notice when you start a Houseparty chat and can jump in unless you use the “sneak in” option (accessed by holding down the app icon).

Epic is baffled as to how the app could be hacked in order to serve as a backdoor into Netflix, Spotify and so forth. But there has been a deluge of posts on social media claiming just that. In a tweet Houseparty said: “We are investigating indications that the recent hacking rumours were spread by a paid commercial smear campaign to harm Houseparty. We are offering a $1,000,000 bounty for the first individual to provide proof of such a campaign to bounty@houseparty.com”. Epic also says it is stopping development work to address the security and privacy issues that Houseparty users have raised.

Can you delete it?

You can easily delete the Houseparty app. However to delete your actual account you will need to send a written request to support@houseparty.com. The exception is if you are using an iPad or iPhone, in which case you can delete straight from your device.