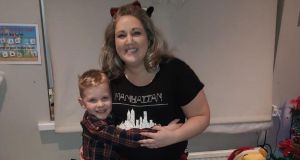 Margaret Lowndes and her son Noah (6). “I am really worried that he’s losing progress and worry that he’ll fall behind even further unless he is able to catch-up in some way,” she says.

Many families of children with special needs and autism are struggling to cope with a sharp increase in distress and meltdowns at home since schools shut down, a charity has said.

AsIAm, which offers supports to those with autism, said it was receiving regular appeals for help from vulnerable families finding it difficult to cope.

Speaking on World Autism Day, Adam Harris, the charity’s chief executive, said members of its community require “routine, structure and predictability, all of which have now vanished”.

“Autistic people suffer anxiety easily, and so this has become quite extreme for many at this time,” he said.

A survey of its members found that some 70 per cent of family members say the coronavirus crisis has been either hard or very hard to manage, while 80 per cent said an autistic loved one is finding it harder to self-regulate due to being stuck at home.

Key concerns raised by families include dealing with an increase in distress and meltdowns, ability to abide by the social distancing restrictions and what would happen if an autistic person or loved one became sick.

Margaret Lowdnes is one of hundreds of parents struggling to cope since schools closed three weeks ago. Her son Noah (6) has autism and had been making good progress at school but fears he will be robbed of his potential if the closures continue until summer.

“I am really worried that he’s losing progress and that he’ll fall behind even further unless he is able to catch up in some way,” she said.

Ms Lowdnes said Noah’s difficulty understanding why school is shut and why he cannot leave the house has led to problems with self-regulation, which can involve him getting annoyed and shouting, breaking down into tears or withdrawing into himself.

“It’s happening four or five times a week. It’s horrible to watch,” she said. “You try to intervene and help as quickly as you can, but it’s not always possible.”

“Covid-19 is making life difficult for everyone. But for autistic people who already feel socially distant, isolated and anxious, these uncertain times can be even harder,” he said.

Mr Harris said he hopes education authorities will consider an expanded form of schooling or “July Provision” for children with special needs once the crisis eases. This, he said, would form a crucial support for vulnerable children who look set to lose a quarter of the school year.

“July Provision was set up in recognition that the summer break was too long for autistic students who require a daily structure, support in developing new skills and often require additional support in accessing the curriculum,” he said.

“It is vital that July Provision is made available this year, including providing an online option to parents if necessary. We firmly believe the scheme should be extended to 80 hours over eight weeks to reflect the long . . . unplanned break in tuition.”

In the meantime, he said groups such as AsIAm were working to support children with special needs through the crisis. This has included a special online seminar on dealing with change and the creation of a series of social media stories to explain different aspects of the coronavirus response such as testing, self-isolation and the “lockdown”.

Mr Harris said the organisation has suffered a huge loss of revenue and needs donations to keep services going. He said the public can assist the charity by texting ASIAM to 50300 at a cost of €4.