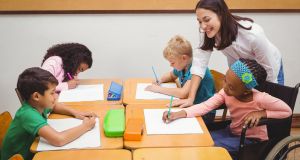 The Government is to shelve controversial plans to change the way special needs assistants (SNAs) are allocated to support tens of thousands of vulnerable schoolchildren. Photograph: iStock

The Government has shelved controversial plans to change the way special needs assistants (SNAs) are allocated to support tens of thousands of vulnerable schoolchildren.

In a statement, the Department of Education said its plans to automatically “frontload” more than 10,000 SNAs to mainstream schools in September 2020 will be "deferred" for a year.

Many groups representing parents, principals, teachers and schools expressed fears in recent months that the new approach was a cover for cuts to supports.

Department officials confirmed on Thursday that the plan has been paused as a result of disruption to the education system linked to the coronavirus pandemic .

Under the revised plans, all schools will retain their existing levels of SNA support for the coming year.

In addition, schools will be able to apply for additional SNA support by email in cases where there are gaps in the new school year.

An additional 1,000 SNAs are due to be allocated to the education system in the coming academic year.

In a statement, Minister for Education Joe McHugh said: "A diagnosis of a disability, or a psychological or other professional report, will not be necessary for this process. Rather, other forms of evidence, information or documentation will be used to support such applications.”

Officials said a pause in the introduction of the new system was needed to ensure there is enough time to provide training for principals and other education partners over how the new system would work.

These professionals will play a key role in determining the levels of support needed to children under the new model.

In addition, the delay has been necessitated by the redeployment of therapists who had been working in a pilot project across more than 70 schools linked to the new allocation model.

Among the most vocal critics of the new allocation model was the autism charity As IAm, which argued the changes were a “Trojan horse” for cuts.

Adam Harris, the charity’s chief executive, welcomed the Government decision on Thursday to pause the implementation of the new model.

“While the circumstances are clearly necessitated by Covid-19, this is an important opportunity to re-engage with education stakeholders and, critically, disability representative groups to ensure that any changes to the model are equitable,” he said.

“Our teachers, SNAs and school staff have been doing important work to support students at this difficult time and it would be entirely inappropriate to force though an ill-thought out change.”

The Joint Managerial Body, the management body for the majority of secondary schools, also welcomed the move.

“We haven’t had confirmation that the planned model has been deferred, but if it is the case we’re very pleased,” said Dr Michael Redmond, the body’s director of research and development.

He said it will give school leaders a chance to be fully briefed and trained over the changes and to participate in a pilot of the new model as it was originally envisaged.

Many other groups have also expressed their opposition to the plans, including the Special Needs Parents Association, Down Syndrome Ireland, the Catholic Primary School Management Association and National Association of Principals and Deputies.

These groups argued that a full evaluation of the current pilot programmes were needed to avoid unnecessary errors, make improvements to what is proposed and ensure as smooth and effective roll-out as possible.

Concerns were also raised that it would put major pressure on principals and lead to a case of “parents who shout loudest getting the resources”, while some groups warned of serious risk that SNA supports for vulnerable children could end up being diluted.

The department, however, insisted that no school would lose out in the first year of the new scheme.

It also said children would benefit by having SNAs available in schools from the start of the new school year.