Board responsible for controversial project in dispute with construction firm BAM 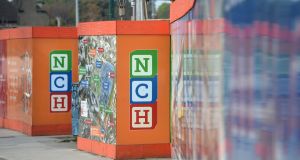 The site of the national children’s hospital in Dublin. The project’s board has issues legal proceedings against the main building contractor on the project. File photograph: Dara Mac Dónaill

The State body responsible for the building of the national children’s hospital has begun High Court proceedings against the construction company contracted to build the hugely expensive facility.

The National Paediatric Hospital Development Board (NPHDB) has already been involved in a series of disputes with construction group BAM, but this is the first time the rows have moved to the High Court.

The cost of the Dublin hospital has been an ongoing controversy for many years, with some fearing the project could end up costing as much as €2 billion.

The overground, or phase B, part of the project is the subject of gross maximum price agreements between the two sides but that has not stopped a series of rows over money, all of which have gone through a dispute management process.

The instruction for the phase B construction works was issued to BAM by the NPHDB on January 8th, 2019, and the phase B works commenced at that time, a spokeswoman for NPHDB said.

However BAM made a claim disputing the validity of the instruction, leading to the dispute that has now ended up in the courts.

“The agreed dispute management process has been exhausted with respect to this specific claim, without agreement from the contractor,” she said.

Given the importance of the works, the cost, and the date for completion of this critically needed new children’s hospital, it is essential that this fundamental contractual issue is definitively resolved, the spokeswoman said.

“In order to rigorously defend the public purse, the NPHDB has been left with no option but to bring the matter to the High Court.”

However BAM, in a statement issued in response to the taking of proceedings, said it had been instructed to begin phase B of the project even though a fully completed design had not been produced, and has still not been produced.

“The NPHDB issued the instruction to commence Phase B despite the fact that the design was not provided as required by the contract. At today’s date, the design is still not complete.”

BAM said it welcomed the fact that the issue would now be subject to careful analysis, and ultimate resolution, by the courts.

“BAM agrees that it is important that these issues be resolved so that all parties can concentrate on the delivery of this vital project to the highest standard in the shortest possible period.”

The company closed down work on the site this week, due to coronavirus crisis, a decision that was welcomed by the NPHDB.

Once the restrictions are lifted, the work on the site can resume, and should not be affected by the court proceedings.