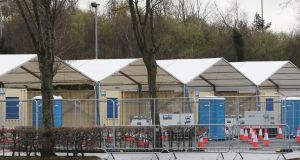 A drive-thru coronavirus testing facility being built in the car park of the SSE Arena in Belfast. A DUP councillor has apologised after being criticised for linking the virus to abortion and same-sex marriage being made legal in the North. Photograph: Niall Carson/PA Wire.

The DUP has distanced itself from one its councillors who said the Covid-19 crisis was God’s judgment on an “immoral” British government liberalising abortion in Northern Ireland.

DUP councillor John Carson, who represents Ballymena on Mid and East Antrim council, has since apologised for the Facebook post, which followed abortion legislation, passed in Westminster last October while the North’s lengthy powersharing hiatus was still ongoing, coming into effect on Tuesday.

The law allows for abortion in any circumstances up to 12 weeks and up to 24 weeks where there was a risk to the physical or mental health of the pregnant woman. There is no time limit in cases of severe foetal impairment or fatal foetal abnormality, or if there is a risk of death or grave permanent injury to the pregnant woman.

Mr Carson on Wednesday linked the coronavirus pandemic to abortion and same-sex marriage being introduced in Northern Ireland.

“I said when abortion was legalised that our nation would be judged by God because of its departure from his word and the legalisation of the murder of the unborn child as well as same-sex marriage,” he said in a Facebook post.

“I was laughed at and mocked by some but as I said at the time, they laughed at Noah until the rain started. You reap what you sow and our nation is now reaping the judgment of God because of an immoral and corrupt government...It is time to repent and turn again to the God of our fathers.”

In the face of criticism over what he had said, Mr Carson put up another post on Thursday which alleged his original remarks were “taken by some and totally misinterpreted”.

“Anyone who knows me will know I would not intentially set out to cause hurt of offence to anyone and if I did then for that I humbly apologise,” he said.

“However, I will never apologise for my Christian faith and will not besilenced by those that are opposed to the truth of God’s word.”

DUP Minister for the Economy Diana Dodds told a press briefing on the coronavirus on Thursday that Mr Carson’s view were “entirely personal” and said they were “certainly not the views of the DUP and do not reflect the views of the vast majority of people”.

She said the comments were a “bit of a distraction” from the very serious challenge of combatting Covid-19.

Ms Dodds said she wanted to place on record her thanks for all the churches had done during the crisis in reaching out to the lonely, the isolated and the needy.

“I believe that we have a God of love mercy and I think that is where most people take comfort. And I think that all faith communities have been working incredibly hard in challenging and very difficult circumstances.”

Ms Dodds said it would be for DUP party officers to decide whether any action should be taken against Mr Carson.