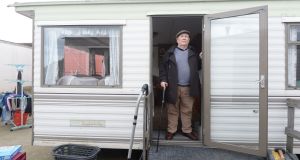 Johnny McDonnell (84) has prostate cancer and bone cancer, and lives in a caravan in Dublin with no running water.

A resident of St Dominic’s Park, an unofficial Traveller site in Darndale, McDonnell is worried about the coronavirus pandemic, particularly how it could impact on younger families with vulnerable children.

“This virus is the worst that ever came in Ireland. I’ve seen the scabies, the flus, the polio, the myxomatosis in the rabbits, and none was as bad as this,” he says. “I’ve never seen the like of it.”

None of the 23 households on the site has running water, secure electricity or isolation facilities. There are more than 50 children living in St Dominic’s, including four with cystic fibrosis and several with asthma, diabetes and developmental delays. One young adult recently had a kidney transplant.

The St Dominic’s Park families are among hundreds continuing to live in overcrowded, unsafe sites during the coronavirus crisis despite a Government instruction to local authorities to make “every effort... to find prompt and practical solutions”.

Many local authorities have “really stepped and up and engaged” with the Department of Housing’s circular of March 18th, say advocates, but some have provided “inadequate or no resources to Travellers in unsafe conditions”.

The circular states: “Some members of the Traveller community, particularly those living in sites with limited facilities, may be particularly vulnerable [to Covid-19] and extra measures may need to be put in place.”

These include, it says: “extra toilets; running water; additional mobile accommodation/space where there is overcrowding; extra refuse collection; access and egress on sites; and additional units (either mobiles on site or houses elsewhere that would allow for self-isolation/quarantine).

“It should be noted that every effort should be made to find prompt and practical solutions on existing sites... The Traveller Accommodation Unit has some funding available for essential mitigation works and any such requests will be prioritised within 24 hours,” council housing managers are told.

Asked if he is worried about his own health, McDonnell says: “I am, but there’s not much I can do about it. I am good enough at my age.”

His son, Thomas McDonnell, is concerned that if a coronavirus case was confirmed on the site, “it would spread very fast”. He also worries about funeral arrangements being a problem if a loved one was to die.

“That would be the saddest thing. There’s no one allowed go,” he says.

Dublin City Council (DCC) has painted two-metre “distancing” lines on the site’s paths and delivered leaflets on Covid-19 to each household, though some residents have limited literacy.

Children are not allowed to visit friends’ caravans but, with limited indoor space, they play on the green supervised by parents.

Many residents are wearing masks and gloves, but describe the lack of running water as “very hard”.

“There’s two sites nearby has running water,” says Winnie McDonnell. “So you fill cans and bring them down.”

Each bay has a portaloo and residents pay a company to collect rubbish.

“There’s some here, though, could really do with an extra caravan if anyone gets sick,” says Winnie. “There’s some with six sharing a bedroom.

“There’s no one with the signs of the virus so far, though if they do get it I don’t know what they’re going to do because there’s nowhere to self-isolate really.”

The city council’s Traveller unit has implemented measures, a spokesman said, including increased waste collection and additional supports for acquiring mobile homes “where required”. There are also plans to disinfect sites’ communal areas and distribute hygiene packs to families, he added.

“Two families [elsewhere in Dublin] have been rehoused, two others have refused offers of accommodation. At no point has any resident in St Dominic’s Park made requests for extra services,” the spokesman added.

In a briefing to Oireachtas members last week, the Irish Traveller Movement said “more than 2,000 families are living in inadequate, unsafe and impermanent conditions”. It says implementation of the circular has been “mixed”.

Many councils have provided portaloos to families who have been asking for them for years, and some now have running water for the first time. Few councils appear to have provided additional mobile homes.

Galway City Council was praised for having established a dedicated unit to monitor the impact of the pandemic on Travellers. This involves its housing department, Galway Traveller Movement and the HSE. It has provided extra portaloos, repaired heating where broken and provided alternative off-site to families in overcrowded conditions.

Traveller groups have commended the actions – at least in part – of councils in Dún Laoghaire-Rathdown, Wexford, Waterford and Clare in moving swiftly to provide resources to vulnerable Travellers.

Groups welcome the emergency measure, passed by the Oireachtas last week, prohibiting evictions of Travellers during the pandemic.

However, there are “still some local authorities which are not compliant”, according to one national advocate, who said concerned families on unauthorised sites won’t seek help as they “fear being evicted”.

“ No provision has been put in place for many Traveller families living in unofficial sites with no facilities,” the movement said.