What happens to falsely imprisoned people after they are released? 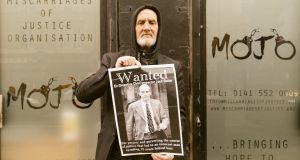 More than one of the people we hear from in Fallout (RTE One, Thursday, 10.15pm), a documentary on life after conviction and later exoneration, describe a heart-breaking similar sensation: a disbelief upon being released that borders on paranoia.

“I was afraid it was a trick,” remembers Sunny Jacobs, who, in 1992, had been sentenced to death and served 17 years in a US prison, and now found herself descending the steps to freedom in slow, wary paces, breaking soon after into a run.

Paddy Joe Hill, convicted with the aid of a coerced confession for the Birmingham bombing, was convinced that it was another ruse. It is the beginning of an awful paradox – freedom without liberation.

Mark McLoughlin’s documentary, broadcast in quick succession by the BBC and RTÉ, follows four stories, beginning with Robert Brown, convicted for murder in Manchester, who served 25 years of a life sentence before the verdict was overturned. Brown speaks with agitated speed and barely suppressed emotion, a restless figure shown moving briskly through the streets. “It’s an amazing feeling,” he says of exoneration. “But it’s a hollow empty victory. And then the real horror story begins.”

Director Mark McLoughlin includes little detail about the exonerations themselves, whether on the basis of new evidence or trials, as though disinclined to dwell. You may wonder then about the other side of these injustices, about malice, politics or incompetence. That gives it the feeling of a campaign more than a dispassionate account, and, concluding with an instruction to follow the Say I’m Innocent campaign, so it proves to be.

The energies of the programme are towards recovery. The most outwardly serene of the group, Jacobs and Peter Pringle, the Dubliner sentenced to death for the murder of two gardaí in 1980, now maintain a sanctuary in Connemara, the Sunny Centre. Disinclined to discuss the details of more cases, perhaps, McLoughlin’s short interviews with those who pass through the centre resemble glowing testimonials: “Every exoneree should go through the Sunny Centre.”

But for all the emerging support structures the programme includes, its sharpest moments are in Brown’s painful awareness that he has recreated his prison cell at home, and that he lives unbroken, but damaged.

“Do you want to live with your misery, or do you want to move on?” asks Sunny, with a hard won brightness. But the truth for many in this extraordinary circumstance is that there is never a full release.

The Music Quiz: What song did the BBC say was 'too depressing' to play?
3

How Goodfellas and the gangster class of 1990 changed Hollywood
5

Coronavirus: How can philosophy help us in this time of crisis?
7 Family deals with its loss as serial killer still roams free
8

Catherine Keener: ‘I did not know about Harvey Weinstein at all’
10

André Rieu: ‘I see a lot of jealousy around me’
Real news has value SUBSCRIBE