Derry Girls review: A moving and significant piece of nostalgia

In the season finale, Lisa McGee’s girls once again turn their backs on history 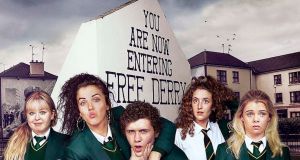 One amusing running joke in Derry Girls (Channel 4, Tuesday, 9pm), Lisa McGee’s nostalgic ’90s-set comedy, is how little impact anything in the political world ever seems to have in the overrun kitchen of the Quinn household.

Fans will remember the bomb scare, in the earliest scene of the first season, whose tremors were confined to interrupted school runs and hair appointments, or the bomb explosion that brought a chill to that season’s last joyful moments. But, for a girl growing up in the North, the Troubles are mostly a dismal kind of background static to the higher pitch of life as a teenager.

That makes it all the more significant that the last episode of McGee’s surefire second series decides to put Bill Clinton’s visit to the city firmly in the foreground, an event it finds more momentous than mirthful. There were certainly funnier episodes this series, like the matchless neighbourhood funeral fuelled by hash scones. There were tighter ones, like a Dead Poets Society riff that morphed into The Usual Suspects. And there were more adventurous ones, like a trip to see Take That in Belfast that involved outmanoeuvring assorted prejudices and an escaped polar bear.

Yet the closer had a sly sense of significance, where McGee, still buzzing with affectionate, piano-house recollections of the era, found a sobering message for today. The last words of the series were handed to Bill Clinton, exhorting Derry to “believe that the future can be better than the past”, even as the show, and a current moment with growing concerns, are much more ambivalent.

Attending the presidential speech, though, is a modest act of rebellion for the girls, forbidden to cut school by Siobhán McSweeney’s typically perverse Sister Michael. “People in this place stop killing themselves for five minutes and the whole world loses the absolute run of itself.”

For the elder members of the family, it’s a wild goose chase, pursuing intercepted radio signals to a taxi dispatch office in Burt, Co Donegal, where the only diversion is to see Tommy Tiernan’s magnificently underplayed Gerry erupt with long-suppressed rage. It is one of the show’s most memorable explosions.

That the group’s unity is threatened, by the departure of the adorably hapless James (Dylan Llewellyn), may be par for the course in terms of sitcom plot dilemmas. But who could feel unmoved to see the group once again turning their back on history to huddle together under a thrift-store stars and stripes that is missing 30 or so of its stars?

“Being a Derry Girl, it’s a f**king state of mind,” Jamie-Lee O’Donnell’s brassy Michelle insists, which is a banner that all fans can salute. Perhaps the show’s hiatus will also involve, in Clinton’s words, a just and lasting peace. But hopefully not for too long.