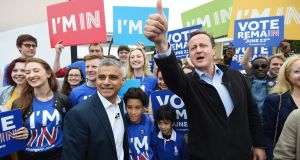 Seems like old times: British prime minister David Cameron and London mayor Sadiq Khan campaign for Remain on May 30th, 2016. Cameron is back in the public eye with the release of his memoirs, an interview Monday on UTV, and a documentary Thursday on BBC1. Photograph: Facundo Arrizabalaga/EPA

Based on the best-selling Bill Hodges trilogy by Stephen King. When beloved local author John Rothstein is found murdered, Hodges, Holly, and Jerome (Brendan Gleeson, Justine Lupe, Jharrel Jerome), along with local police, must track down his killer. But this case is more complex than the cold-blooded killing of an American icon. Unpublished novels of Rothstein’s were stolen from his home, and they are worth millions. As the case unfolds, the trio learns that although Brady may be gone, his depravity lives on in the lives of his victims.

Crime and Punishment
Monday, Channel 4, 9pm
With the British government proposing major changes to the UK justice system, this new series captures the work of police, probation, prison, prosecution and parole all coping with difficult cases and managing risk to the public and themselves, with limited resources. Tonight’s programme looks at the case of Paul Bousell (28), who is serving a controversial IPP (Imprisonment for Public Protection) sentence for holding up a Londis and threatening staff with a knife. Created in 2003, the IPPs allows courts to pass a sentence with no specific end date, and release can only be obtained if an offender can convince the parole board that they no longer pose a risk to the public.

Documenting Hate: Charlottesville
Monday, RTÉ One, 11.35pm
This documentary, originally made for US investigative series Frontline in 2018, looks into some of the white supremacists who took part in the riots in Virginia in 2017. The film-makers suggest that many went unpunished and are still operating aross the US.

The Big Cook Out
Tuesday, BBC2, 6.30pm
Sam Evans and Shauna Guinn, owners of the Hang Fire Smokehouse barbecue restaurant in Barry, Wales, meet people across the country before preparing huge feasts for local communities. They begin by visiting the Clwyd Special Riding School, a charity offering equine experiences for people with additional needs. They celebrate the organisation and its staff’s achievements by providing a mouth-watering menu involving beef briskets barbecued in a giant cinder-block smoker. Local volunteers are on hand to help out too before tucking in.

Love in the Countryside
Tuesday, BBC2, 9pm
New series. Sara Cox helps more people living and working in remote rural areas to find love. The first episode introduces Grace, a sheep farmer from Wales, and Martin, a Yorkshire dairy farmer. Grace faces inheriting her father’s business when he retires, so is looking for a partner willing to share the responsibility. Martin has not had a relationship in more than a decade, so leaves behind his Doncaster roots to attend a speed dating event in London attended by women from across the UK who have written to the show.

Japan with Sue Perkins
Wednesday, BBC1, 9pm
The title of this two-parter pretty much tells you what you need to know: Sue Perkins visits Japan. Of course there’s more to it than that; she wants to find out how the nation manages to juggle being one of the hubs of the hi-tech world with its traditional past. Her journey begins in the capital, Tokyo, home to 36 million people; it will also be the home of next year’s Olympics. With that in mind, Perkins investigates the nation’s love of sport, albeit via sumo wrestling, which has always been a preserve of men until now. She also learns more about Japan’s current musical trends and spends time at a tough business school before travelling outside of the city to sample a more rural lifestyle.

New series. Ben Kingsley stars in this darkly funny New Mexico-set neo-noir as Pastor Byron Brown. His path is about to cross that of a young grifter, James (Jimmi Simpson), who thinks he knows a way to get his hands on the pastor’s church fund – but he may have underestimated the holy hard man. Jacki Weaver, Terry O’Quinn and Luis Guzmán costar.

1944: Should We Bomb Auschwitz?
Thursday, BBC2, 9pm
In April 1944, the Allies became aware of the true horror of the Holocaust thanks to the testimony of two prisoners who had escaped from Auschwitz. But with the knowledge came one of the biggest moral dilemmas of the 20th century: should they bomb the death camp? Combining dramatic reconstructions of the debate with first-hand testimony from survivors, archival material and expert voices, this documentary explores the huge decision. Destroying Auschwitz would mean diverting troops. There were questions about how many civilians and prisoners would die in the bombing raids, and how the Nazi propaganda machine would respond to an attack. And while these difficult deliberations took place, people were being slaughtered on an industrial scale.

It’s the big day on the muso calendar, when some lucky artist is conferred with this prestigious award that has absolutely no bearing on whether they ascend to greater heights (Arctic Monkeys) or sink quickly into obscurity (Speech Debelle). Still, the shortlist is a good barometer of critics’ musical tastes, featuring 10 records considered the best of the year by those who should know. The show is presented by Lauren Laverne and features live performances from most of the nominees: Anna Calvi, Black Midi, Cate Le Bon, Dave, Foals, IDLES, Fontaines DC, Little Simz, NAO, SEED Ensemble, slowthai and The 1975. This year, it’s a no-brainer who we’ll be cheering for: Dublin band Fontaines DC, the only Irish act on the list (true, Idles’ guitarist Mark Bowen is from Belfast). They are nominated for their ragged, rough-edged and oddly compelling debut album, Dogrel. Hopefully, the judges will be won over by their very Dublinese distillation of punk and poetry.

The Cameron Years
Thursday, BBC1, 9pm
As the UK lurches toward its Brexit endgame, it might be a good time to reacquaint ourselves with how the Brits got themselves and us into this mess in the first place. But you could be going back a long way, so this two-part series sticks to former prime minister David Cameron’s key role in triggering the Brexit referendum. The programme boasts “unprecendented access” to Cameron, presumably in the heavily fortified man shack he’s been hiding in since stepping down following the disastrous result which has set Britain on the road to nowheresville. The programme looks at how Cameron was pressured into calling the vote by a growing cabal of Eurosceptics as well as the growing rift with the EU as a result of the euro zone crisis. Incredibly, Cameron seriously thought he could get Boris Johnson and Michael Gove to support his Remain stance – delusional.

The Rebel Chef: My Restaurant Revolution
Thursday, Channel 4, 10pm
Chef Gary Usher was dismissed as a teenage loser but has turned his life around to make good food at a decent price. Now he sets out to bring his food to Prescot, Merseyside, which has not had a new restaurant in more than 30 years. Usher’s plan is to open a bistro in the rundown town centre, but to achieve this he must crowdfund £50,000, build a French-style eaterie out of rubble, and convince the sceptical townsfolk to embrace the exotic food he will be serving.

Inside the Vatican
Friday, BBC2, 9pm

A film crew gains exceptional access to Vatican and is given a year to examine its inner workings. Cameras capture everyone, including Pope Francis himself, his head of security, the nuns who cater for the homeless, the choristers of the Sistine Chapel, the papal gardener and the chief of the diplomatic corps. The result is a unique and exclusive insight into the lives of those who live and work in this independent city state. The first of two programmes follows the build-up to Easter, when tens of thousands of pilgrims arrive and Pope Francis takes centre stage in the world’s biggest theatre of faith.

Margaret Atwood is the author of more than 50 books of fiction, poetry and essays. Her hit novels over the years have included Cat’s Eye, The Robber Bride, Alias Grace, The Blind Assassin and the MaddAddam trilogy. However, it’s her 1985 classic The Handmaid’s Tale, the inspiration of the controversial TV series, for which she is now best known. In the first of a new series of the arts programme, Mary Beard talks to the 79-year-old writer about her career and previews Atwood’s new book, The Testaments, which is set 15 years after the final scene in The Handmaid’s Tale.

The Deceived: Paul Mescal, as charismatic as ever, but where’s his inner GAA hunk gone?
Real news has value SUBSCRIBE