Weekend TV guide: 15 of the best shows to watch

Vicky Phelan and Maeve Higgins on The Late Late, evil Barry O’Hanlon back being menacing for Fair City’s 30th anniversary, Strictly’s professionals and the return of Ray D’Arcy 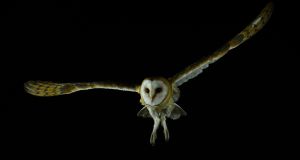 There’s a familiar face back on The Late Late Show with the return of the iconic flying owl, as well as the original theme music from the era of the show’s original master, Gay Byrne.

The Late Late Show
Friday, RTÉ One, 9.35pm
Ryan Tubridy will have his hands on the most sought-after piece of silverware in Ireland this weekend: the Sam Maguire Cup. Two tickets will be up for grabs for a lucky audience member for Saturday’s All Ireland Football final replay between Kerry and Dublin at Croke Park. Then Limerick woman Vicky Phelan will describe being given the shocking news that she had just 12 months to live and how the subsequent year would see her take on the Government and medical establishment – and win. Phelan was already no stranger to battling hard times, and tonight she joins Tubridy to share the extraordinary story of her life. Also: Former Liverpool and England legend Michael Owen will be on to talk about the goal that changed his life, why fame wasn’t all it was cracked up to be, and why he now feels he is living life in reverse. Plus: Dermot Bannon and Diarmuid Gavin on collaborating on Room to Improve, the rivalry between them, and why they are both big advocates for an outdoor dip in the nip; Cork comedian Maeve Higgins, jetting in from New York, on starring in her first movie Extra Ordinary, talking to ghosts and life stateside; Dermot Kennedy performing his hit Outnumbered; and legendary Aslan frontman Christy Dignam, who will sing a classic and chat about surviving abuse, addiction and cancer – and where he gets his unbreakable spirit from.

Gogglebox
Friday, Channel 4, 9pm
Many of the couch potatoes-turned-stars are back with a new run of the review show. As ever, they will be enthusing over how much they love whatever series is under review, as well as being gobsmacked or thrilled by some of the films we all saw decades ago. But for them it’s like they’ve never seen a movie before, let alone a classic. And of course there’s a few domestic squabbles thrown into the mix, while assorted pets vie for screen time. Craig Cash’s narration, as ever, is a joy, even if we know that Lee and Jenny in Hull are best friends, as he tells us every week.

The Rook
Friday, Virgin One, 9pm

The first episode of this eight-part London-set thriller gets off to an arresting start as Myfanwy Thomas (Emma Greenwell) wakes up in a park surrounded by dead bodies, and with no memory of how she got there. Myfanwy must fight to uncover her past and resume her position at the head of Britain’s most secret (supernatural) service before the traitors who stole her memory can finish what they started. Joely Richardson and Adrian Lester costar.

For the first show of the autumn season, Gavin James joins Ray D’Arcy while Dustin the Turkey makes a telly comeback with (it says here) a “shocking confession!” James will perform some of his most popular songs live in studio and discuss his musical roots and his success to date. Also: Denise Van Outen joins D’Arcy ahead of her debut in the iconic Australian soap Neighbours. She will describe her adventures Down Under, how golf helped ease her anxiety, and why Ireland will always be her second home. Plus: After flying the flag for Ireland at last month’s World Tango Championships in Argentina, 99-year-old Jim McManus from Waterford will dance his way onto the show with a special performance. As for Dustin, he will also perform a song from his new musical comedy, along with bestselling author Eoin Colfer and comedian Eric Lalor.

Strictly the Professionals
Saturday, BBC1, 7pm
Fifteen years ago someone thought up a show where famous faces learned the finer points of ballroom dancing. The brains behind Strictly Come Dancing never guessed that the pros doing the teaching would go on to become stars in their own right. In fact, the likes of Kevin Clifton and Anton Du Beke are probably better known to the public than some of the supposed celebrities who signed up for this year’s contest. So, before the new series starts in earnest, Strictly the Professionals pays tribute to the dancers who have become the lifeblood of Strictly, as they discuss why they keep dancing and the hard graft it takes to reach the top of their profession.

Graham Norton is still on his summer holidays, so Jonathan Ross should have the pick of the guests as he returns for a new series of his chat show. The bumper crop of celebrities for the first episode are Elizabeth McGovern and Michelle Dockery, who will be plugging the new Downton Abbey movie. All-round national treasure Stephen Fry is also dropping in for a chat, along with comeback kid Craig David and actor Martin Freeman, who, in a handy bit of cross-promotion, can currently be seen in UTV’s A Confession. Plus music from Charli XCX and Christine and the Queens, who will perform together in the studio.

Ceiliúradh LGFA
Saturday, TG4, 8.15pm
A special preview and celebration of the TG4 All Ireland Ladies Football Finals which will take place in Croke Park on Sunday. Tonight Gráinne McElwain is joined by special guests with interviews and music from the six counties competing in the Finals.

Last Night of the Proms
Saturday, BBC2, 7.15pm
Katie Derham hosts the climax of the classical music festival live from the Royal Albert Hall. American mezzo-soprano Jamie Barton joins Sakari Oramo and the BBC Symphony Orchestra and Chorus and the BBC Singers in a programme that includes a world premiere by Daniel Kidane, ballet music from Manuel de Falla’s The Three-Cornered Hat, Laura Mvula performing Sing to the Moon, plus classics by Bizet, Saint-Saëns and Verdi. At 9pm, coverage switches to BBC1, as the event is brought to its familiar and rousing close with Rule, Britannia!, Land of Hope and Glory, and Jerusalem.

Britain at Low Tide
Saturday, Channel 4, 8pm
New series. Palaeobiologist Tori Herridge and her team of experts explore the north coast of Kent. The programme takes a look at the excavation of one of the most significant shipwreck discoveries of recent times, the origins of a strange sandbar, and a forgotten military base in an unusual location that proved pivotal in deciding the outcome of the first World War. Plus, a look at how rising sea levels and coastal erosion mean that much archaeology may be lost before it can be documented.

It’s incredible to think that Fair City has been going for 30 years – and I still haven’t gotten around to watching a single episode. Maybe over the next three decades I’ll find a half-hour to catch up on all the goings-on in Carrigstown. Fair City fans will of course already be well up on all the soap’s shenanigans, but for its 30th anniversary there’s something extra-special planned: the return of Barry O’Hanlon (Pat Nolan). This is, apparently, a big thing: Barry’s unexpected reappearance is set to rock the community to its core, as he’s hiding some dark secrets from his brutal past. The week’s action culminates in an hour-long special on Wednesday, in which cats are certain to be released from bags and chickens will surely be on the next bus home to roost.

Ciara is a wild and crazy gal tottering aimlessly through life on wobbly high-heels. Liz is her sensible, straitlaced sister who is trying desperately to have a child. The two are constantly at war, but when Liz asks Ciara out of the blue to become a surrogate mother, the squabbling siblings are thrown together in the most unexpected way. Charlene McKenna and Gemma Leah-Devereux star in this one-off comedy about two women on a bumpy ride to motherhood.

For 10 days ever August, the Breton city of Lorient hosts Festival Interceltique, the world’s biggest Celtic festival of music, dance , songs and poetry. Here’s a chance to experience some of the highlights from this year’s extraordinary event.

Pet Shop Boys: Live in Hyde Park
Sunday, BBC4, 8pm
Formed in 1981, Pet Shop Boys are one of the most commercially and critically acclaimed British music artists of all time. They have achieved eight platinum albums in the UK, sold 50 million records worldwide and are listed as the most successful duo in UK music history by The Guinness Book of Records. This programme features footage of tonight’s headline performance at Radio 2 Live in Hyde Park – Neil Tennant and Chris Lowe’s only UK gig of 2019 – in front of more than 40,000 festival-goers.

Inside Cadbury: Chocolate Secrets Unwrapped
Sunday, Channel 4, 8pm
In theory, we all know we should be eating less sugar. But does that mean that we want it taken out of some our favourite sweet treats? Britain’s biggest and best-loved chocolate maker could be about to find out as cameras go behind closed doors at the famous Bournville plant during a pivotal year for Cadbury. Scientists are at work to cut sugar from Dairy Milk, the chocolate bar on which the company built its fortune and reputation.

Graham Norton: ‘I’m in awe of gay people who stayed and fought and changed minds’
4