Weekend TV guide: 12 of the best shows to watch

New motorheads join the Top Gear team, plus Soccer Aid for Unicef, profiles of Michael Jackson and Tyson Fury, and the smoove grooves of yacht rock 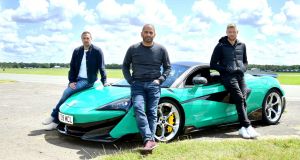 Bake Off: The Professionals – The Final
Friday, Channel 4, 8pm
The three remaining teams must fight tooth and mixing bowl to be crowned the winners of this incredibly tough patisserie competition. Judges Benoit Blin and Cherish Finden have for the first time set two challenges for the final: four hours to create a stunning afternoon tea and seven hours to create mind-blowing wedding feast. So which team will impress the judges with their precision, passion and patisserie prowess?

I Can Go for That: The Smooth World of Yacht Rock
Friday, BBC Four, 9pm

Although the 1970s radio-friendly sounds of the likes of Steely Dan and Hall & Oates were often dismissed in the heyday of punk, their sophisticated arrangements and sharp lyrics have been reappraised and dubiously labelled “yacht rock”. As well as looking at the influence of Bread, Michael McDonald and the Doobie Brothers, American broadcaster and writer Katie Puckrick reveals how these smooth sounds provided welcome relief for an America in turmoil after the Vietnam War and Watergate scandal.

Celebrity Gogglebox
Friday, Channel 4, 9pm
The rolling cast of celebrities featured in this new series already know what it’s like to be in the public eye. So will they sugarcoat their opinions a bit when they give their verdict on the week’s TV? The first group of famous(ish) armchair critics include Rylan Clark-Neal and his mum Linda, Nick Grimshaw and his niece Liv, Gyles Brandreth and Sheila Hancock, and Little Mix. They will let us know what they think about some of the big shows of the week – and a few of the small-screen gems you might have missed.

Seventy women from the midlands discuss their relationships with the men in their lives in this crowed-pleasing Irish documentary. Reviewing His & Hers in 2010, Donald Clarke said that “rarely have the odd and the ordinary combined to such beguiling effect. Winner of a small hatful of prizes over the last year, Ken Wardrop’s debut feature proudly defies categorisation...a near-perfect act of cinematic sleight of hand: a beautiful tale told apparently by accident”.

Royal Academy Summer Exhibition 2019
Saturday, BBC Two, 8.30pm
It’s the world’s longest running and largest open-submission show. Kirsty Wark and Brenda Emmanus will follow three hopeful amateur artists while delving into the process of curating and hanging the most complicated exhibition in the UK art calendar. They visit famous artists preparing for this year’s show, including Bob and Roberta Smith, Polly Morgan and Jeremy Deller, and get to know this year’s co-ordinator Jock McFadyen. There’s also a look behind the scenes of the opening night party and hear a live performance from James Bay.

Heavyweight boxer Tyson King is one of British sport’s most controversial figures. The 6ft-9 fighter became a force to be reckoned in November 2015 when he defeated long-reigning champion Wladimir Klitschko. However, Fury’s outspoken views on women, abortion and gay culture have caused outrage. Though he looked like a broken man by the end of 2017, his fight against Deontay Wilder a year later proved he was far from over. Here he talks about his extraordinary career – and his struggle with mental health issues.

Top Gear
Sunday, BBC Two, 8pm
It’s almost all change on the globally popular motoring show. Matt Le Blanc has moved on and Paddy McGuinness and Freddie Flintoff have taken over. There is some sense of continuity as Chris Harris returns for the latest tun. In their first adventure together, the gearheads show up in the sweltering heat of Ethiopia in their first cars. Back at the track, Harris road tests the Ferrari 488 Pista and McLaren 600LT. Will Paddy, Chris and Freddie gel as well as Clarkson, Hammond and May used to before they went off on their Grand Tour?

Soccer Aid for Unicef 2019
Sunday, UTV, 6.30pm
The celeb-filled event will take place at Chelsea FC’s Stamford Bridge Stadium. Presenter Dermot O’Leary will be the guide while Kirsty Gallacher reports pitch-side. There will be a half-time performance from Unicef UK Ambassador Rita Ora. Clive Tyldesley provides the commentary, and there will be contributions from Olivia Colman and James Nesbitt.

13 Moments: The Death and Destruction of Michael Jackson
Sunday, Channel 5, 9pm
A decade after the eponymous singer’s death, he remains an untouchable genius to his fans. A string of chart hits and best-selling albums cemented his status as a superstar. Yet for many, Michael Jackson’s legacy will forever be tarnished by the stories and controversies which surrounded him in his later years. Interviewing friends, staff, fans, psychologists and journalists who chronicled his career and life, this film charts a seemingly glittering life that in fact was far from charmed — from the very start.

Cardiff Singer of the World 2019
Sunday, BBC Four, 9pm
Trying to pick the best vocalist from around the world is a far from easy task, as this ever engaging competition proves. Since 1983 it has been a platform for a wealth of tunesmiths, and every two years there’s a chance for entrants to shine. More than 400 hopefuls applied for this year’s event, before the final few were whittled down. Now the first round begins, with 20 of the world’s most outstanding classical singers from 15 countries. The finale is next Saturday, June 22nd.