The Brigade: Teaching today’s young Cork men how to ambush the British

Review: A TV show based on the War of Independence feels too close to current realities 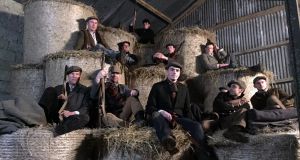 The further history slips from living memory, the more desperate the attempt to reach back for it. Take The Brigade (RTÉ One, Thursday, 10.15pm) a programme that commemorates Tom Barry and his legendary 3rd West Cork Flying Column. It recruits 12 earnest young west Cork men, strong and true, costumes them in period flat caps and tweeds, arming them with heavy bolt-action rifles, and teaches them how to ambush the hated British.

“It’s a great way to reflect,” insists one of four military instructors, Conor Kingston, “and I suppose to compare and contrast how far we’ve come as a nation.”

Well, about that. At a time when men on this island are again being recruited to paramilitary organisations, where grievances are stoked by sentimental appeals to the past, and firearms are in fatal supply, it isn’t hard to find a tingle of discomfort within this play-acting.

Devised by Samuel Kingston and directed by Conor Morrissey, the show pairs the tang of oral history, giving vivid descriptions of British cruelties and Irish temerity, with the zing of a reality show themed on the War of Independence. In short, welcome to Loathe Island.

All this unflagging self-seriousness would be adorable, if the fantasy didn’t threaten to turn violent. Assessing the squad and their ammo, one instructor speaks of, “hopefully putting them into an engagement”.

With whom? Is a similarly young team, recruited from a British university to comb through Cork for local encounters, supposed to be role-playing the infamous Essex Regiment?

No, mercifully these pleasant academics are retained to grimace apologetically at historical reports of torture and atrocity. “It’s pretty heavy stuff,” sighs one.

That seems a more sincere expression of empathy than the performance of recreationists. The students also extract the more interesting details, long subdued by the chauvinism of history, about the daring contributions of women to the War of Independence.

The show includes those conversations, and documentation, but prefers not to recreate it with female volunteers, instead repeating what “a privilege it is to honour those men” by sleeping in set-dressed barns and running from antique automobiles. “I do feel like I’m slipping out of the present and back to the past, for sure,” nods one of the lads.