Review: The comedian’s search for meaning in post-Catholic Ireland doesn’t rock the boat 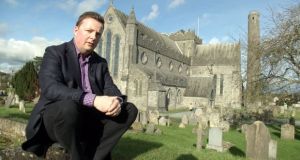 ‘I do really, really want to believe in something,’ says Oliver Callen

Early in Divorcing God, Oliver Callan makes an admission that sounds as wistful as a prayer. “I do really, really want to believe in something,” he says, making a pilgrimage through Ireland in a humble Nissan. “So I suppose I’m one of those impressionable people.”

Indeed, most people will know him already as a man of gentle impressions. An accomplished mimic, his political and celebrity impersonations always suggest keen study, even if his satire conveys less bite.

It’s not surprising then that Callan – “a fence-dwelling, wishy-washy agnostic” as he later confesses – seems to be sitting there facing the light. Can a comedian so slow to rock the boat be in that much danger of losing his religion?

From the title down, which presents secularisation in acrimonious terms, this documentary delivers quite a superficial impression of the nation, while pulling countless punches.

In the “clamour” to separate religion from public life, Callan says, elegantly forlorn in his priestly frock coat, “are we in danger of losing all the good stuff: the charity, the care, the place to go when tragedy strikes a community?” Does God really have a monopoly on these things? Oh, ye of little faith.

Although Catholic indoctrination long delayed his own coming out, Callan admits, he begins at his hometown church where he expresses his doubts: “Returning to Iniskeen made me feel spiritual,” he reasons, “but that could have been nostalgia.”

Perhaps it has also prompted him to reach for parables, as when he suggests to Andrew Madden, who in the 1990s exposed his priest Ivan Payne as a sexual abuser, that Madden’s pity for the man now “sounds like it’s bordering on forgiveness”.

At a pagan shrine later, where he coyly describes the parted vulva of a Sheela-na-Gig as something that “could be interpreted as a sexual pose”, his much advertised, little witnessed cynicism melts away after an encounter with a devout elderly woman. “Maybe we’re too militant to tear things down or maybe dance on its grave,” he frowns.

Perhaps unconsciously, Divorcing God is full of such language, where secularism is “the rush to divorce God”, which may put our morals “in danger”, and leads to the chimera of “tearing down all the statues, all the crosses, and aggressively remov[ing] the church from the state.”

Never mind the studies that associate atheism with higher standards of generosity, when Callan meets a benign, non-religious Irish family, even his punchlines feels like a kneejerk conservatism: “It’s just a shame you’re all going to burn in hell for all eternity!” Everybody laughs.

That may be the edgiest joke the humorist will rustle up while off-duty, but it’s hard to shake the feeling that Callan is looking for confirmation of his convictions. At an evangelical Christian service of unnerving intensity and focus on sin (“God asks us not to be snowflakes,” explains the celebrant, a former alcoholic now exhibiting the zealotry of the convert) Callan is “willing to drink the Kool Aid of Jesus.”

In a later encounter with a psychologist, where he hears convincing arguments for removing religious iconography from polling stations, because they prime responses from the indoctrinated, he is more struck by the truism that faith can help in times of stress. “I’m blown away by that,” he marvels, like a man healed by placebos.

To lose your faith in religion as the sole arbiter of moral authority is not to fall into wanton chaos, but to put your faith in people instead. Although the show includes some secular examples, perhaps it’s not surprising that a satirist might be slow to do so.

But it’s heartening to see a classroom of school students exhibit more independent thought. In one religious school, a girl phrases the question exactly right when she asks, “Is there really a God?”, rather than imagining some jilted higher power in an acrimonious break-up waiting for us to come to our senses.

If she can do a good Leo Varadkar too, we’ll have someone to believe in.