Has Joe Duffy ever considered becoming a private detective?

Radio review: The presenter shows off his digging skills over a racist incident on the train 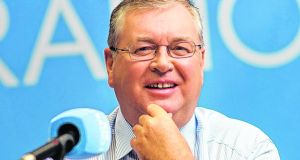 Has Joe Duffy ever considered becoming a private detective? This isn’t meant as a sly hint, à la managers suggesting employees seek new opportunities by way of issuing a P45, but is a genuine question. For one thing, Duffy frequently exudes the world-weary air of a Raymond Chandler character. More crucially, when the presenter takes on a case he cares about, he doggedly tries to crack it.

On Monday, the client who shows up seeking help at Duffy’s chaotic office – better known as Liveline (RTÉ Radio 1, weekdays) – is Prasun Bhattacharjee, an Indian tourist who recounts being racially abused on the Belfast-Dublin train the previous evening. Bhattacharjee describes the hour-long tirade he and his elderly parents endured from an Irish man, contrasting the sympathy of fellow passengers for their plight with the perfunctory response of the train guards, who allowed the abuser to stay on. “Were you happy with the staff?” asks Duffy. “Not absolutely,” replies Bhattacharjee.

Others aren’t so phlegmatic. Duffy talks to Peter, a passenger from the same carriage, who tells of his embarrassment at the insults but admits that he didn’t try to stop the abuser. “Were you afraid of him?” the host asks. “I was, to be quite honest,” Peter replies.

It seems that might be that, but Duffy has other ideas. “We want to find this man,” he says on Tuesday. He talks to Emma, who also witnessed the incident and recorded it. Duffy issues health warnings about the offensive language on the recording before playing the clip of a clearly inebriated Dubliner telling Bhattacharjee’s family to “f**k off back home”. It’s shocking to hear such unalloyed abuse but it also makes for bracing radio, as Duffy knows. “We don’t like repeating this,” he says of the clip, before doing just that.

The next day, more leads emerge. A woman named Carla tells Duffy how she too was on the carriage and approached the abusive man on several occasions to try to dissuade him. The emergence of new details from different accounts lends the whole sorry saga a compelling Rashamon-style quality, but the narrative of vile abuse, passenger concern and official indifference remains consistent.

Duffy may have got to the bottom of this depressing incident of intolerance, but one suspects the Liveline detective agency won’t be lacking similar cases any time soon

The belated appearance of Irish Rail spokesman Barry Kenny on Wednesday’s show only amplifies the latter theme, particularly when he admits the Garda have not been formally involved. Duffy is incredulous: “Racial abuse is a crime.” It also emerges that Irish Rail staff recognise the abuser, who has “misbehaved” before. Duffy speculates that the man may be unwell, though by now he has another target. He wonders why Irish Rail can tweet heavily about missing dogs, as they did recently, but not about attacks on passengers. As with so many whodunnits, the investigator is as curious about the cover-up as the crime.

All in all, it’s terrific listening, full of public interest, human drama, social issues and even daft diversions. The latter when comic actor Rory Cowan phones in to condemn the abuse as an aberration at a time when the Taoiseach is the gay son of an Indian immigrant. “Ireland is becoming fabulous,” Cowan says. It’s a moot point. Duffy may have got to the bottom of this depressing incident of intolerance, but one suspects the Liveline detective agency won’t be lacking similar cases any time soon.

An altogether more cheerful ambience prevails on The Ray D’Arcy Show (RTÉ Radio 1, weekdays), despite the presence of a guest once known for delivering bad news. Far from bringing the mood down, former newsreader Anne Doyle proves irresistibly charming company when she joins D’Arcy at the JFK Memorial Park and Arboretum in her native Co Wexford. Even the breaking news about the death of Doyle’s old friend Philomena Lynott doesn’t dampen her mood. Instead, she remembers the mother of the late Thin Lizzy frontman Phil Lynott as “the queen of Ireland”, albeit one fond of “salty” language.

Doyle herself has a memorable turn of phrase. In advance of hosting a public interview with Senator David Norris on Bloomsday, she encourages her host to read Ulysses, despite his view that Joyce’s book is “too much of a chore”. “Have a glass of Burgundy and a bit of Gorgonzola, and sit back and enjoy it,” she urges. When D’Arcy, audibly sparking off his guest, compliments how she looks, Doyle responds that she’s “held together with hope and glue”.

The conversation continues in this vein, unabashedly frivolous but also joyous, aided immeasurably by Doyle’s much-missed tones: her voice was made for radio. Her mood is clearly infectious, for D’Arcy is in engaging form for the rest of the show. On this evidence, it’s a shame Doyle can’t deliver a bulletin every day.

Then again, such traditional media formats are old news, at least according to PR consultant Terry Prone, as she talks to Shane Coleman on Newstalk Breakfast (weekdays). Discussing revelations that Tory leadership candidate Michael Gove took cocaine when a journalist 20 year ago, Prone thinks such behaviour is no longer a bar to political ambition. Gove, she feels, is more hampered by his lumbering attachment to “mainstream media”, in contrast to his Twitter-adept rival Boris Johnson.

Prone goes on a riff on how the mass media used to have “moral arbiters” who “decided what voters thought”, citing the long-dead example of Walter Lippmann. In contrast, newspaper columnists such as her host, Coleman, “have a voice, but absolutely no influence”. Coleman laughs, perhaps at Prone’s chutzpah: PR people, after all, can equally be bypassed by social media. “I have to go off and write my totally un-influential column,” Coleman says ruefully.

But as Liveline shows, mainstream media can still make waves. Just make sure Joe Duffy is on the case.

Radio Moment of the Week: More spicy Currie for Kenny

Whatever one thinks of Edwina Currie’s politics, one understands why the former Tory minister is a regular fixture on the Pat Kenny Show (Newstalk, weekdays) and indeed in this column: there’s rarely a dull moment when she’s on. On Tuesday, she scorches through the foibles of Conservative leadership hopefuls, such as Esther McVey’s intellectual abilities. “You’re not suggesting she’s a dumb blonde?” Kenny asks, a tad too gleefully. “Well, she’s not blonde,” Currie replies. As for Michael Gove’s drug-taking (see above), Currie states she’s never taken anything. “I’ve always been too damn scared of what I might get up to under the influence.” Right enough, one can only imagine Currie’s comments if she lost her inhibitions.