Coronavirus: Ryanair to cut jobs and pay as entire fleet could be grounded 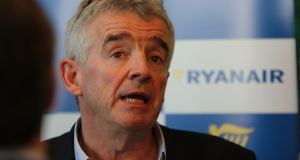 Staff members at Ryanair are facing job losses and pay cuts as “extraordinary and unprecedented travel restrictions” due to the coronavirus could force the airline to ground its entire fleet in the coming months.

In a statement on Monday, Ryanair said the spread of the Covid-19 virus and associated government travel restrictions have had a “significant and negative impact” on the schedules of all Ryanair group airlines.

Over the weekend for example, Poland and Norway banned all international flights, while in other countries, without travel bans, there has been severe reduction of air traffic controllers (ATCs) and essential airport services.

Ryanair said it expects the result of these restrictions will be the grounding of the majority of its aircraft fleet across Europe over the next seven to 10 days.

“In those countries where the fleet is not grounded, social distancing restrictions may make flying to all intents and purposes, impractical, if not, impossible,” it said.

For April and May, Ryanair now expects to reduce its seat capacity by up to 80 per cent, and a full grounding of the fleet “cannot be ruled out”.

“This will involve grounding surplus aircraft, deferring all capex and share buybacks, freezing recruitment and discretionary spending, and implementing a series of voluntary leave options, temporarily suspending employment contracts, and significant reductions to working hours and payments,” it said.

“We are working with our people and our unions across all EU countries to address this extraordinary and unprecedented Covid-19 event, the impact and duration of which is, at this time, impossible to determine.”

The airline, in response to queries, said it could not be more specific in relation to job losses and pay cuts.

A spokesman for Fórsa, which represents both cabin crew and pilots, said the union has been in “constant contact” with all aviation employers since the crisis took hold.

“This is such a rapidly developing situation, but we are obviously keen to protect jobs,” he said.

“Maintaining our global connections when we’ve made it to the other side of this crisis is desperately important,” he said. “Those in power must keep one eye on the future, as well as tackling the immediate threat.

“The effect may be temporary but we are facing a near total shutdown of UK aviation for the next two months at least. Airlines cannot survive that without help and government needs to step in now with guarantees and funding.

“That means ensuring that the people who make this industry work are supported through this crisis.”

The Ryanair group has strong liquidity, with strong cash and cash equivalents of over €4 billion as at March 12th.

It said it would focus now on completing as much of its scheduled flying program as is permitted over the next week so it can repatriate customers, where possible, even as flight bans are imposed and ATC and essential airport services are reduced.

“We have seen a substantial decline in bookings over the last two weeks, and we expect this will continue for the foreseeable future,” it said.

“Ryanair is a resilient airline group, with a very strong balance sheet, and substantial cash liquidity,” he said.

“We can, and will, with appropriate and timely action, survive through a prolonged period of reduced or even zero flight schedules, so that we are adequately prepared for the return to normality.”