Without Fr Ray the standard of dancing will go up, the human interest factor way, way down 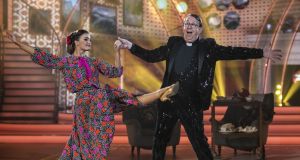 Life imitates farce but with surprisingly moving results as the miracle that is Fr Ray Kelly’s continued participation in Dancing with the Stars comes to a graceful end. Fr Ray has since the start of this year’s show run a gauntlet of low scores from the judges, high votes from the viewing public and a disgraceful hate campaign from idiots with nothing better to do.

But that was all merely leading up to his glorious swan song as his journey towards Father Ted status reaches its logical conclusion. In a sparkly top that looks like all the galaxies in heaven blazing at once, he and pro dancer Kylee Vincent perform an American smooth to The Divine Comedy’s Songs of Love, AKA the theme from Father Ted. Dancing With The Stars has finally jumped the sacristan.

“Fr Ray, as you danced around, the smiles on people’s faces represented your time on the show so far,” says judge Brian Redmond. “Unfortunately the quality you are up against is just too high.”

He votes for the padre’s premature elimination following a dance-off with pacesetter Lottie Ryan. As does DWTS creative director Darren Bennett, though he agrees the Co Meath clergyman brought something unique to the season and will be missed. “Fr Ray and Kylee, you have blessed us ever single week with your warmth, humour and humility,” says Bennett.

There’s suddenly a lot of weepiness in the room – much of it radiating from Fr Ray. “I’m getting a bit emotional,” he says. “It’s been marvellous. One of the best journeys of my life.”

The Father Ted theme hasn’t been chosen at random. It’s TV week on the show. First up is Gráinne Gallanagh who, with pro-partner Kai Widdrington, dances a samba to the Wonder Woman tune. Yes, the incredibly cheesy 1970s s one. She does so dressed as the titular crime-fighter and puts in a super-heroic performance. Though not THAT super-heroic – more DC Expanded Universe than MCU (don’t pretend you don’t know what I’m talking about).

“For me it was a little bit missing in timing – but still a great start,” says Loraine Barry.

“I just have this feeling you really didn’t enjoy it – you didn’t really bite into the samba. I need you to channel your inner Beyoncé,” says Bennett, picking up on the Donegal model’s nerves.

“I was so terrified… I’m still shaking,” admits Gallanagh. She scores 22.

Then it’s Fr Ray, accompanied by Vincent. The routine contains multitudes. There’s Fr Ray’s aforementioned top – a dress jacket that could guide a ship home on a moonless night. The performers begin by pouring tea and gazing lovingly at their cups. There’s also a rug that really ties the room together. Surreal and Dancing With the Stars are already on close terms. But this is the moment at which they truly commit to one another. Briefly, you wonder if you’re watching RTÉ One on a blustery Sunday night or are trapped in the Black Lodge in David Lynch’s Twin Peaks: The Return.

“It’s more and more like Tales of the Unexpected,” says Bennett, picking up on the charge of weirdness running through the set. “Who’d have thought 10 weeks ago we’d have a priest dancing to Father Ted on national TV . . . .It wasn’t a half bad American smooth.”

“Kylee has learned to embrace your own individual natural talent,” says Redmond. “No mistakes tonight . . . a much better performance than some of the others we’ve seen from you.” In his last turn under the spotlight, Fr Ray scores an entirely respectable 15.

Next up is Fair City actor Ryan Andrews. With Giulia Dotta he dances a Charleston to the Muppet theme, with three actual muppets in the background (no, not Jennifer Zamparelli, Nicky Byrne and Nicky Byrne’s quiff). It’s a stonking effort and deservedly receives a standing ovation.

“I’d pay to watch that all day long,” says Redmond. “I’m often criticised as being the Statler and Waldorf of the Dancing with the Stars world – but for me that was beyond critique. It was perfect.”

“Beyond any level I’ve ever seen in Dancing with the Stars,” says Loraine Barry. “Everything you did was full on.” Andrews scores a perfect 30. Even the foam puppets seem excited.

Lottie Ryan goes in a very different direction as she and Pasquale La Rocca do a paso doble to the Mission Impossible theme (surely that should have been Fr Ray’s song?)

“It was dark, it was shady, it was daring,” says Loraine Barry. “That combination was really, really good.”

“One of the best technical paso dobles I’ve ever seen,” says Bennett.”It wasn’t Mission Impossible. It was Mission Accomplished.” She scores 28.

Finally former Kilkenny hurler Aidan Fogarty and Emily Barker pop up for an American smooth to the Top Cat music.

“A sophisticated alley cat . . . that sums you up perfectly,” says Brian Redmond. “You just looked so comfortable. I still can’t believe you’re a hurley player and you take such great dance position,” says Loraine Barry. He scores 25.

There’s a surprise as Only Fool and Horses star John Challis (aka Boycie) pop up to offer Fogarty best wishes. “Me and mine wish him all the luck in the world , , , cheers.” Nicky Byrne meanwhile sensibly drops the handshake and instead bumps elbows with Fogarty. Well done, Nicky. So you’re not just an impressive quiff.

And then it’s time for the “Rock ’Til You Drop’ marathon. The idea is simple. All five celebs and their dancers take part in a group bop to the jaunty/ torturous Happy Days theme. They must continue until eliminated by the judges. It’s essentially the Hunger Games with sparkle and high-heels instead of crossbows and an overacting Woody Harrelson.

Fr Ray is first off, while Lottie Ryan eventually triumphs over Ryan Andrews. “That was the most hotly contested marathon . . . there was almost nothing between every couple, probably except Fr Ray,” enthuses Bennett.

After that it’s all over bar the dance-off. Fr Ray finishes in the bottom two for the week and with that his fate his sealed. He exits at the quarter finals. It’s all still to dance for ahead of the semis seven days hence. But however it pans out, Dancing With the Stars without Father Ray is going to be very different. The standard of dancing will go up. The human interest factor way, way down.