We only get to see the story of television, a global phenomenon, through nation state-shaped cookie cutters 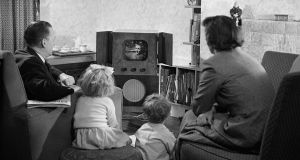 What are new media gadgets doing to us? How do they change our psychology and habits? How have they transformed public and private space? When did staring at a screen become a normal part of life? When did we start to accept machines as artificial companionship? I explored the arrival of television, the first private screen, by listening to Irish people’s memories of the medium’s earliest days. These recollections provide as much insight into today’s media as they do into television in the past.

Bringing television into our homes had profound consequences. Today, we take the most important effects for granted. They are hidden in plain sight. Television, for instance, is designed into the way we build and use our homes.

Levittown, the archetypal mass-produced suburb, offered its vision of built-in, all-electric convenience to the American public in 1949. By 1950, an Admiral television was permanently fitted into Levittown living room walls as a standard fixture. Television had become a central home appliance and a core pastime for families. Ireland followed America’s example, slowly. In 1962, the mayor of Limerick, Mrs Frances Condell, announced that since “we are now in this television age”, the box rooms at the front of social housing, which were rarely used, should be “incorporated with the living room or kitchen so that the family could sit around the television and watch”. It was, after all, “obvious that every Corporation house in the future is going to have a television set”. Television quickly became part of a common-sense understanding of what an Irish family home should be.

Far beyond just rearranging the furniture, television turned homes inside-out. We could now stay home to see the world. The new private screen let us inhabit distant places, imaginary spaces and virtual communities. For over 70 years, people have witnessed westerns, space launches, wars and family dramas without ever leaving their front door. The home became a venue for public life and a retreat from the world outside.

In television’s earliest days a new set was an occasion for a social gathering. Whether they liked it or not, television owners in the 50s and early 60s entertained the neighbourhood. As television became ubiquitous, homes became less welcoming to unannounced visitors. Prospective hosts might be more interested in the screen than in receiving guests. Programmes could fill the evening without any need to go out for news or amusement. People had less need of their neighbours. Television has long provided synthetic company in the home.

A slow retreat into the home transformed public space. Television left an architectural wake, for example, in the abandoned and converted cinemas in Dublin’s suburban villages.

The closure of the Theatre Royal, and the adjoining Regal cinema, on June 30th, 1962, initiated a decline in cinema in Dublin. It was also the death knell of Dublin’s variety theatre scene. However, the decline of local theatre and cinema was not just caused by Irish people staying home to watch the box. The Sligo Champion newspaper opined that “Television has killed the Theatre Royal”, but that it had done so at a distance. The US television industry had soaked up Hollywood film production money. Television films could yield immediate returns on investment without depending on unpredictable box office revenues. This reduced the number of high quality, first-run films that cinemas could offer to compete for audience attention. The disappearance of Dublin’s local cinemas started in America.

For US academic, Lynn Spigel, the history of television in America is a history of the privatisation of entertainment. The “primary site of exhibition for spectator amusements was transferred from the public space of the movie theatre to the private space of the home”. Ireland witnessed a similar privatisation. These transformations in space were intertwined with changes in our use of time.

Television became a means of telling the time and dividing the day. The six o’clock news marked the end of children’s programmes and the start of parents controlling the set. If children were not already in bed, the nine o’clock news ended their viewing. Programmes like ITV’s Sunday Night at the London Palladium, rounded out the weekend and created anticipation of the week ahead. Individuals and families created daily and weekly rituals around the set and their favourite programmes. People fondly remembered these shared television habits as traces of what home had felt like in childhood and early adulthood.


There was a cost attached to television and the new habits that families created around it. Time spent viewing could not be spent doing something else. Still, television became routine without jarring with previous habits or creating any great sense of loss for them. People clearly recalled their screen habits and rituals but were often at a loss to describe things that they had stopped doing. Like the smartphone, television slipped in as the new normal.

Listening to people’s memories uncovers aspects of a social history of television in Ireland. It also reveals the shortcomings of the usual ways in which broadcasting histories are written.

Histories portray television as a catalyst to a “new Ireland”, accelerating Ireland’s modernisation. They recount how the new medium pierced an oppressive silence around sex and sexuality that had been imposed by a traditional, Catholic society. This is a narrative of emancipation; a journey from silence to the freedom to speak and to be heard. It is also limited, exclusionary and conservative.

Television in Ireland went far beyond RTÉ. The first television programmes to be received in Ireland were broadcast by the BBC. In 1961, the year of Telefís Éireann’s launch, about half of Irish television households could also view BBC and ITV channels. What role did British channels, less inhibited in discussing sexuality, have in breaking Ireland’s silence? To date, broadcast histories have never asked.

However, there is no conscious nationalist or pro-RTÉ bias here. Broadcasting histories typically depend on sources from state and broadcast archives, and from press coverage. British channels were inside Irish homes but outside of Irish politics. They left little trace in Dáil debates, RTÉ authority minutes or national newspaper controversies. This dependence on archive and press sources means that, internationally, broadcast histories are unintentionally but effectively nationalist. We only get to see the story of television, a global phenomenon, through nation state-shaped cookie cutters.

Writers have addressed television as part of the history of the Irish State. However, the programmes that people watched, and the rituals and habits that they created around television made up personal and family histories too. And, families vary. The poor experienced television differently to the well off. Women used and related to television in different ways to men. People in the border counties did not watch television in the same way that Dubliners did, and so on. Until now, histories have excluded the polyphony of viewers’ voices by implying that there was a homogenous national audience.

And, broadcasting histories present a conservative vision of technology. Television is portrayed as an inevitable, natural progression. There are few questions about the medium, its effects, and how it has been shaped.

MIT scholar Sherry Turkle described a new media world where, increasingly, we live “alone together”. This phenomenon is not new, and it did not start with computers. A migration into virtual reality was already under way in mid-century suburbia. Essentially, we need to appreciate that these changes are not caused by media. They start in society.

To engage with media is, however microscopically, to make history


Television exemplifies the way that modernity contains opposing forces of expansion and contraction. Over centuries, the economic connections that we depend on, for food, goods and energy, have separated from our localities. They are global. Yet, broadly, our individual scopes of action and influence have shrunk into the domestic and the personal. Modern media are symptoms of economic and political expansion coupled with social and psychological contraction. They provide a sense of connection, to each other and the wider world, amidst increasing disconnection.

Histories of Irish television describe a nation state’s movement from tradition to modernity. Yet, they overlook one of modernity’s central characteristics. For centuries now, processes that shape our media have existed both beyond and beneath the level of the State. Television is a global phenomenon but it is experienced as something intimate and deeply personal. This reality is invisible to institutional and press archives.

Media consist of habits, rituals, language and meaning as well as machines and institutions. We make and remake media when we use them, reject them, or put them to uses they were never designed for. To engage with media is, however microscopically, to make history. So, to better capture the history of any medium it helps to listen the stories of how people used them in the past. For today, we should worry less about what media do to us. What life do we want to build through what we do with them?

Edward Brennan is a lecturer in the School of Media, TU Dublin. His book, A Post-Nationalist History of Television in Ireland, is published by Palgrave Macmillan

Winter Love Island: Laura Whitmore is the hostess with the most… time off
3