Michelle Monaghan: ‘We have a responsibility as women in this industry’ 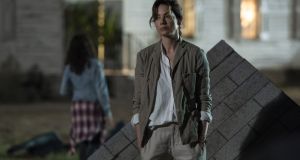 Michelle Monaghan in Messiah, which is streaming worldwide on Netflix

It’s a testament to Michelle Monaghan’s smooth politeness that when I appear to throw a question entirely from leftfield, she emits a polite, slightly confused laugh and ploughs ahead. Today, we are discussing Messiah, Netflix’s latest big-budget series, yet Monaghan thinks I have asked her about what it’s like to work with Robert Downey Jr, her co-star in 2005’s Kiss Kiss Bang Bang. She launches into a polished spiel about how she will always hold a place in her heart for the actor, before I realise she has misheard me.

“No, I was asking about working with Roma Downey,” I interject. Roma Downey, Messiah’s executive producer, is better known on these shores as the woman from Derry’s Bogside who appeared in the soapy drama Touched by an Angel. Together with her producer husband Mark Burnett, Downey is worth an estimated $411 million (and is, curiously enough, one of 48 people that Donald Trump follows on Twitter). Anyway, Monaghan and I laugh at our tangled communication wires. Smooth as molasses, off she goes again.

Downey has long been in the business of producing faith-leaning content, but Messiah is a band apart. Created by Michael Petroni, Messiah certainly has religious overtones, albeit wrapped in a 21st century political thriller. Monaghan plays Eva Geller, a US intelligence officer who encounters a lone figure, Al-Masih (a beguiling Mehdi Dehbi), who arrives from Syria claiming to be sent from God. It being the 21st century, it doesn’t take too long for Al-Masih’s message to travel on social media, and soon he has a sizeable swell of followers. To Geller’s mind, he’s a fraud keen on upending the world’s geopolitical order, although she keeps coming up against some evidence that unseats her. All the while, Al-Masih is causing more and more upheaval wherever he goes. A keen and clever meditation on religious difference in the social media age, Messiah bears the hallmarks of a typical Netflix series; taut, stylish, pacy, with an all-important twist in there somewhere.

Of course, the internet has already done its thing by providing spoilers, evidently picked up in the trailer for the series.

“Listen, that’s the nature of what this show is about,” notes Monaghan, “I’m not surprised people would try and spoil show endings anymore, because that’s the world in which we live on. The nature of the show and what the character is about is fascinating, but what’s also important about the show is to remember not ruining it for anyone.

“The one thing I love about the show is that everyone’s take away can be different at the end of the show depending on your own belief system,” she adds. “I can sit and watch this with my mom or my husband and they will have a different viewpoint on who this man is. If its sparks that kind of conversation, I’m in. I’m encouraged by the fact that all the characters are relatable and all in search of something, whether it’s salvation or hope or freedom. I think people’s opinions will change from beginning to end.”

The global scope of the show was another element of the project that made taking the role a “no brainer”.

“It represents a number of perspectives, not just a western point of view,” she reveals. “I found Eve to be complex, someone who is very dogmatic, and how her pursuit of the truth also distracts herself from confronting her own truth.”

One online commentator had noted that it was good to see Monaghan back in a tenacious and gritty role after (his words) not having too much to do in the Mission: Impossible sequels. It’s a compliment, if a somewhat backhanded one, I offer.

Monaghan laughs lightly. “I mean, listen. The Mission franchise is one I love so much and feel incredibly fortunately to feel part of that series,” she says. “It was an incredible part of life and one that may continue on. That said, I love any role where I can be referred to as tenacious. That’s quite the compliment.

“Personally as an actor I want to explore all different genres and aspects of my own personality, and being able to find roles such as this one [in Messiah] is oftentimes very rare.”

Thus far, Monaghan’s CV runs the proverbial gamut: there have been saccharine rom-coms (Made Of Honor); prestige series (True Detective); acclaimed neo-noir thrillers (Gone Baby Gone); and even the odd critically panned family film (Pixels). It’s a mixed bag by anyone’s yardstick, although she has worked with an impressive slate of directors, among them Ben Affleck, Cary Fukunaga, Shane Black, Chris Columbus and Duncan Jones.

“We all know how limiting this industry can be, so we really take it into our hands to search our roles that are different to the ones we explored in the past,” Monaghan affirms. “I’m interested in having longevity in my career, and taking on challenges. Sometimes it’s the role, sometimes it’s an opportunity to work with a fellow actor or director that I haven’t before. There’s never a perfect recipe where all the things are singing.”

Next up for Monaghan is a Blumhouse remake of 1996’s supernatural horror The Craft, this time with indie director Zoe Lister-Jones at the helm.

Monaghan says she can’t say too much about the project for fear of “giving too much away”, but on Lister-Jones, she observes: “She’s a really strong voice, a great, empowered voice. She loves that film from the ‘90s and I love it too.”

This groundswell of empowered female voices clearly excites Monaghan. In the week that we talk, Harvey Weinstein shuffled out of a civil hearing in a New York court after settling a $25 million (€22 million) settlement. In a civil case against Weinstein’s studio, the monies will be paid out to dozens of women who have accused the disgraced producer of preying on them.

#MeToo is still very much a topic worth bringing up, although I ask if actors like Monaghan are yet weary with being asked about it time and time again.

Momentarily, Monaghan’s cheery and smooth veneer cracks, and she lets out a weary sigh.

“The conversation is finally out there and the conversation should definitely continue,” she notes. “We have responsibility as women in this industry to do whatever is in our power to ensure that this kind of behaviour stops. I’ll never roll my eyes at it [the #MeToo question].”

And before I can delve further, to see if she too has experienced a similar experience to that of other women in Hollywood (Monaghan has been photographed with Weinstein on more than one occasion), a Netflix executive interrupts to abruptly end our transatlantic phonecall. We make our polite farewells. Still smooth and with the synthetic warmth and cheeriness of a seasoned Hollywood pro, Monaghan is on to her next interview.

Messiah is streaming on Netflix