Dancing With The Stars: singing priest Ray Kelly conjures up the spirit of Father Ted

TV review: The DWTS juggernaut is back, strewn in glitter, slathered in gel and sprinkled in stubble – and that’s just Nicky Byrne 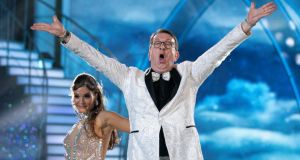 Fr Ray Kelly with Kylee Vincent during the first live show of Dancing with the Stars 2020. Photograph: Kyran O’Brien

It’s only just New Year and already the great reality television smackdown is upon us. ITV’s The Voice landed on January 4th; the new Love Island kicks off next week. And now Dancing with the Stars returns to Sunday night prime time, strewn in glitter, slathered in gel and sprinkled in stubble (and that’s just Nicky Byrne).

The people’s choice this year may well be Fr Ray Kelly. The singing priest went viral with a cover of Leonard Cohen’s Hallelujah in 2014. He’s no dancer and essentially receives a pity vote of eight from judges Julian Benson, Loraine Barry and Brian Redmond out of a possible 20.

But his enthusiasm could power half the grottos in the country as he stomps through a foxtrot with Kylee Vincent, one of four new dancers in 2019.The spirit of Father Ted is conjured throughout. In his video set-up, we see Kelly introduces Vincent to the parishioners at Sunday mass and they perform a quick twirl before the altar (Kelly and Vincent, not the parishioners).

The religious theme carries through to their foxtrot, accompanied by Spirit in the Sky as sung by Doctor and the Medics. Alas no miracles are worked. Loraine Barry observes that Kelly “did his best”.

“You have lovely agility . . . you danced from the heart,” adds Julian Benson. He’s being kind. Priests will fly if Kelly reaches the final.

Generally, the new intake of celebrities ticks the traditional Montrose boxes: you’ve heard of most and vaguely recognise even those whose names draw a complete blank. So let’s give a big sparkling hello to Fair City stalwart Ryan Andrews, 2FM presenter Lottie Ryan, Big Brother winner Brian Dowling and the rest (I’ve only listed those three because they are reckoned to be the favourites).

Still, it isn’t entirely out with the old. Jennifer Zamparelli is back for her second stint as co-host. She’s joined by Byrne, taking time out from causing us to question the existence of God via the never-ending, if perfectly harmonised, Westlife union.

They’ll be hoping to do better than their debut run together, when their banter was more toe-curling than Westlife’s Rat Pack phase. The early signs aren’t especially encouraging. We start with a groaning pre-credits pastiche of Prohibition-era flappers stomping (it’s the new 1920s etc etc).

Can it get worse? It most certainly can – Zamparelli fires off a quasi-joke about Byrne clocking up lots of air-miles, and later lands a weird one about contestant Michael Carruth hopefully not accidentally thwacking his dance partner – he being a boxer and everything.

An uncomfortable silence similarly swirls like confetti as Byrne cracks wise about wanting to start the year on the “right foot” (he is, ha ha, waving his right foot in the year).Quick bring on the dancers – or anyone!

The crushing news is that – pauses to scream at the heavens – there aren’t any eliminations in the opening episode, in which the five male contestants get hoofing. Nor will there be next week when the female hopefuls take a twirl. That’s to give competitors a chance to figuratively find their feet (if they need to literally find their feet we’re all in for a long evening).

The lack of tension is alas all too palpable in a season opener that conspicuously fails to set the floor alight. Fingers crossed the the excitement ratchets up hereafter. Otherwise, we’re all going to be wondering if Dancing with the Stars has lost its twinkle.

First out of the traps is Aidan Fogarty, All Ireland winning Kilkenny hurler (is there another kind of Kilkenny hurler?). He dances a jive with Emily Barker to New Hope Club’s Tiger Feet. “You attacked it like an athlete,” says an approving Benson. Brian Redmond agrees, predicting Fogarty might have a shot as overall winner. He scores at not at all shabby 18 out of 30.

Then it’s time for former Olympic boxer Michael Carruth to get into the ring, bringing his gold medal along for good measure. He’s accompanied by Karen Byrne for an American Smooth soundtrack by I’m Shipping Up To Boston by fightin’ Irish cosplayers Dropkick Murphys.

It doesn’t augur well that his instructor has a dubbed him “Michael Flatfoot”. And his first tilt is indeed ever so slightly River-pants. “This was like a new interpretation of the American Smooth – I love the Celtic twist, the Michael Flatley bits,” says Benson, trying to be kind.

“There was one point I was going to throw the towel in – there was much jigging around . . . I thought it was Paddy’s Day,” says Redmond, critiquing the Paddy O’Blimey jiggery pokery aspects of the routine.

“Knuckle down and learn the routine,” nodded Barry. Was that a boxing pun, Loraine? We’re going to pretend it wasn’t. His final score is 12.

They’re breathless and so are some of us at home. But we’ve only just begin. Ryan Andrews – fancied by many to go all the way by dint of his panto experience – teams up with Giulia Dotta for a cha cha to Shawn Mendes’s If I Can’t Have You. “At times the arms are great, at other times they switched off . . . [but] the way you used your feet was phenomenal,” says Brian Redmond. “I loved it,” agrees Loraine Barry. Andrews, who split his trousers in training, romps to a total of 21.

The curtain is brought down by Brian Dowling and his salsa with Laura Nolan to Lizzo’s Juice. “Lots of arms, lots of face, lots of movement,” says Julian Benson, advising Dowling to add some “bottom” to go with his “lots of top”. His total is a respectable 16.

It’s obviously far too soon to predict a winner (we feel safe stating Fr Ray will have his heavenly wings clipped before long). The real hope is that the female participants – among them Mary Kennedy and Glenda Gilson – bring some desperately-needed pep in seven days’ time. Tonight is too often a story of boredom on the dance floor.