So sorry: a social-media team’s 30,000 apologies to enraged commuters 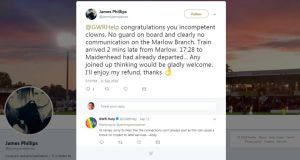 Andrew Couch spends much of his work day apologising, usually on Twitter, which turns out to be more complicated than it sounds. Simply typing “I’m sorry” over and over again won’t do. “You can’t repeat yourself,” says Couch, part of the social-media team for Great Western Railway, one of the UK’s largest train companies. “Sometimes you say, ‘I’m sorry we’ve done this.’ Or ‘Apologies for this.’ Or ‘I’m sorry that this happened.’ You’ve got to understand the situation, and you need to mix it up.”

This is the Age of Sorry for nearly every train company in Britain. In May, National Rail, which owns the country’s entire rail infrastructure, unveiled its twice-a-year revision to daily timetables. Because of new connections and services, there were four million or so changes, about seven times the usual number. The result was a shambles.

Naturally, National Rail later apologised. Train companies like Great Western, which are granted franchise rights to run different lines, are still coping with the aftermath, made worse by a continuing and tricky upgrade to larger and spiffier trains. There have been tens of thousands of delays and cancellations, enraging just as many passengers. The anger, in turn, has prodded train companies to a seemingly endless cascade of apologies.

A running total of online train-company regrets is available on a website, sorryfortheinconvenience.co.uk, created by Omid Kashan, a fed-up commuter and web designer. It tallies up apologies from the Twitter accounts of dozens of British rail and other travel companies, including Ryanair. All together they have tweeted “sorry” more than 420,000 times since the start of the year.

Great Western is the one of the sorriest train lines of them all. Its six-member social-media team is split between Plymouth, in southwest England, and the company’s headquarters, in Swindon, a town that has been synonymous with trains since the early 19th century, when Great Western manufactured locomotives and rail carriages here, and built houses for its workers.

The Great Western team has issued 30,000 apologies since the start of the year, an average of 110 per day. (Only one company, Northern, apologises more.) Customers pepper the Great Western Twitter feed, @GWRHelp, about 1,000 times every 24 hours.

@GWRHelp congratulations you incompetent clowns. No guard on board and clearly no communication on the Marlow Branch. Train arrived 2 mins late from Marlow. 17:28 to Maidenhead had already departed... Any joined up thinking would be gladly welcome. I'll enjoy my refund, thanks 👌

The worst train service ever @GWRHelp I can’t remember the last time I got a train on time. Missing my London connection again! Well done u bunch of idiots

“Missing my London connection again!” Holly Rush wrote not too long ago. “Well done u bunch of idiots.”

Compliments regularly pop up, too, but those are outnumbered by gripes about doors that won’t open, inexplicable odours, reservation mix-ups and more. People routinely post photographs of crowded trains, or trash that has been left by other passengers.

Many add withering hashtags, like #whenwillwelearn, #ripoffservice and #thisisnotgoodenough. Through it all the social-media staff patiently offer guidance, explanations – and apologies. A name is attached to each Great Western response, just one way the team tries to convey sincerity. “When you type it’s difficult to make it sound like you’re not being patronising or sarcastic,” says Joanna Linzinger, who manages the team. “So we have to try really hard to make our sorries sound like they’re coming from a warm person rather than a keyboard.”

Great Western has about 6,000 employees. The ones who work on the trains – as opposed to the social-media team, who work behind computers – do not get specific instructions on the fine art of apologising.

Instead they go through an extensive programme called Great Experience Makers, which includes a day-long crash course in empathy. At a recent session, Kerry Cooney, a trainee, told the class a story about getting stuck at a station on a Great Western train from Reading. “The first announcement by the crew was, ‘I’m really sorry, ladies and gentlemen, but we can’t find the driver,’ ” she said.

Another announcement soon clarified. The driver wasn’t missing. He was stuck on another Great Western train.

To land his job on the social-media team, Couch had to demonstrate, among other skills, a capacity to endure abuse, and throughout a recent 4pm-to-midnight shift he is unflappable. His office is on the second floor of a modern building, with space for about 10 cubicles and a view of the entrance of an underground car park. With a bottle of Coke and a bag of paprika-flavour crisps beside his keyboard, he works through one question and complaint after another.

A passenger fumes that he is stuck on a train. ‘You are an utter disgrace to the industry and public service,’ he tweets. Couch does some research, then apologises

A woman named Ali wants someone to hush passengers in the quiet carriage of her train. Searching through a staff directory, Couch instantly finds the mobile-phone number of the manager on that train and calls. The manager doesn’t pick up. It is the first “sorry” of the night.

A passenger named James Edwards fumes that he is stuck between Worcester Shrub Hill and Pershore. “You are an utter disgrace to the industry and public service,” he tweets. “Your comments please?” Couch does a quick bit of research, explains what is wrong with the train and apologises.

More tweets pile up. “Congratulations you incompetent clowns,” writes @jammyjamiejames. “Train arrived 2 mins late from Marlow Branch. 17:28 to Maidenhead had already departed.” This one doesn’t take any research. “Sorry to hear this,” Couch writes. “The connections can’t always wait as this can cause a knock on impact on later services.”

There is outrage about reserved seats that have not been reserved and demands for refunds. One of them is from a woman who grumbles that she had been delayed twice this week on Great Western trains. Couch asks what kind of ticket she has. “If it’s a daily, she might get compensation,” he says, before he starts to type an apology. “See? It’s not all doom and gloom.” – New York Times